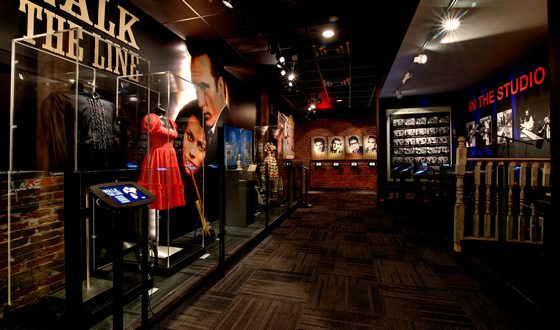 Check HERE for Johnny Cash Museum Special Ticket Offers!
The Johnny Cash Museum once again is proud to be among great company as a “Top 10 Trending U.S. Attraction for Fall 2017” by TripAdvisor. Owners Bill and Shannon Miller are elated to see fans, tourists and locals celebrating this “must-see” attraction and returning time and time again to see the latest exhibits honoring the professional and personal life of American music icon Johnny Cash.
“We are gratified that fans from around the globe have once again recognized the Johnny Cash Museum as a world class attraction,” says Founder Bill Miller.
Since opening its doors in April 2013, The Johnny Cash Museum has expanded twice adding a café and additional exhibition space.  The latest wing of exhibits profile “Walk the Line,” The Carter Family, The Legends of Sun Records and Cash Covers in addition to green screen technologies that enable fans to get a picture with Johnny Cash. The museum has received numerous accolades for their exhibitions and services:
Icon Entertainment, the parent company for The Johnny Cash Museum, also owns and operates The Patsy Cline Museum, Nudie’s Honky Tonk and Skull’s Rainbow Room. It was recently announced that a Merle Haggard museum and restaurant will be among their award-winning offerings in the summer of 2018.

About The Johnny Cash Museum
Earning the AAA Gem rating, The Johnny Cash Museum experience has quickly spread around the globe with outlets like CNN, USA Today, Parade, The NY Times, The NY Post, Billboard, Vogue, Southern Living, ABC, CBS, NBC, FOX, Yahoo, Huffington Post, London’s NME, etc. all buzzing about the attraction. You never know who you will see at the museum as celebrities like Former VP and Nobel Prize winner Al Gore, CMT Nashville cast members, Noah Galloway, Dancing With The Stars Val Chmerkovskiy, Weezer, The Oak Ridge Boys and American Pickers’ Mike Wolfe have all been spotted at the attraction. Located at 119 Third Avenue South between Demonbreun and Broadway, the Johnny Cash Museum is open every day from 9 AM to 7 PM. General admission is $18.95 with discounts for AAA, military, senior citizen and youth (6-15). To stay updated on the museum, visit the following:
Website: www.johnnycashmuseum.com
Facebook: www.facebook.com/johnnycashmuseum
Twitter: @CashMuseum
Instagram: @CashMuseum