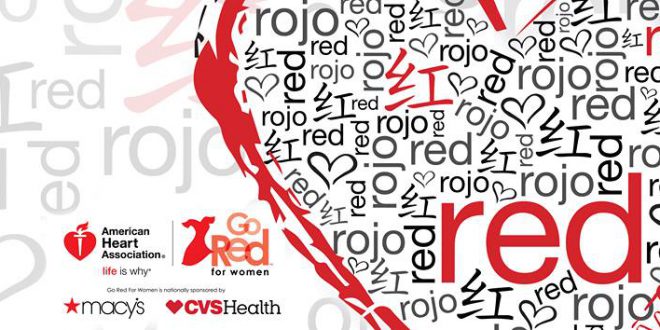 WHO:  This year’s show will be hosted by Marisa Tomei (My Cousin Vinny/The Handmaid’s Tale). Nashville’s CeCe Winans (Grammy award-winning gospel singer and co-pastors Nashville Life Church) is set to walk in red.

WHAT: The American Heart Association’s (AHA) Go Red For Women™ Red Dress Collection, presented by Macy’s, will return to the Hammerstein Ballroom on Thursday, February 8, 2018. The Red Dress Collection, is an exclusive event where celebrities and top designers show their commitment to women’s heart health during New York Fashion Week and American Heart Month. Founded by the now federal convening partner The National Heart, Lung and Blood Institute’s The Heart Truth®, the event reminds women of the need to protect their heart health and take action in the fight against heart disease and stroke in women.

Walking in this year’s Red Dress Collection show are two heart disease survivors – Macy’s employee Karen A. Hill from Washington D.C., who is living with cardiomyopathy, as well as an AHA national spokeswoman and Go Red For Women “Real Women” Lilly Rocha from Pasadena, CA, who survived a heart attack at the age of 37.

WHEN:  The show will take place on Thursday, February 8 at 8:00 p.m. EST, accompanied by a Facebook Live event on Go Red For Women’s Facebook page. Media check-in begins at 6:00 p.m. EST (unless otherwise scheduled with AHA/Edelman), and the red carpet will begin promptly at 6:30 p.m. EST.

ABOUT GO RED FOR WOMEN

Go Red For Women is the American Heart Association’s national movement to end heart disease and stroke in women because it’s not just a man’s disease. In fact, more women than men die every year from heart disease and stroke. The good news is that 80 percent of cardiac events can be prevented with education and lifestyle changes. Go Red For Women advocates for more research and swifter action for women’s heart health. The American Heart Association’s Go Red For Women movement is nationally sponsored by Macy’s, with additional support from our cause supporters. For more information, please visit GoRedForWomen.org or call 1.888.MY.HEART (1.888.694.3278).

The American Heart Association is devoted to saving people from heart disease and stroke – the two leading causes of death in the world. We team with millions of volunteers to fund innovative research, fight for stronger public health policies, and provide lifesaving tools and information to prevent and treat these diseases. The Dallas-based association is the nation’s oldest and largest voluntary organization dedicated to fighting heart disease and stroke. To learn more or to get involved, call 1.800.AHA.USA1, visit heart.org or call any of our offices around the country.  Follow us on Facebook and Twitter.

Macy’s, the largest retail brand of Macy’s, Inc. delivers fashion and affordable luxury to customers at approximately 670 locations in 45 states, the District of Columbia, Puerto Rico and Guam, as well as to customers in the U.S. and more than 100 international destinations through its leading online store at macys.com. Via its stores, e-commerce site, mobile and social platforms, Macy’s offers distinctive assortments including the most desired family of exclusive and fashion brands for him, her and home. Macy’s is known for such epic events as Macy’s 4th of July Fireworks and the Macy’s Thanksgiving Day Parade, as well as spectacular fashion shows, culinary events, flower shows and celebrity appearances. Macy’s flagship stores – including Herald Square in New York City, Union Square in San Francisco, State Street in Chicago, and Dadeland in Miami and South Coast Plaza in southern California – are known internationally and are leading destinations for visitors. Building on a more than 150-year tradition, and with the collective support of customers and employees, Macy’s helps strengthen communities by supporting local and national charities giving more than $54 million each year, plus 180,000 hours of volunteer service, to help make a difference in the lives of our customers.