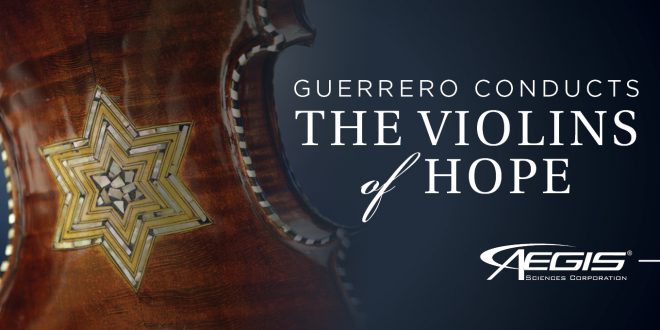 $20,000 funding will support performances and recording of

Jonathan Leshnoff’s Symphony No. 4 next month

The Nashville Symphony has been named the recipient of an Art Works grant from the National Endowment for the Arts (NEA), part of more than $25 million in grants being distributed during the NEA’s first major funding announcement for fiscal year 2018.

The $20,000 grant will be used to support the commission, world premiere performances and recording of Jonathan Leshnoff’s Symphony No. 4,Heichalos, during the Symphony’s Aegis Sciences Classical Series concerts on March 22-24 at Schermerhorn Symphony Center. The commission is also supported by a Creation Project Grant from Metro Arts.

Part of the Violins of Hope Nashville initiative, Leshnoff’s work will be recorded live for future worldwide release on Naxos and will feature Symphony musicians performing on instruments owned by Jewish musicians during the Holocaust.

“Commissioned and written specifically for these historic performances, Heichalos beautifully explores the relationship between the Jewish people and their cultural and spiritual heritage, and its premiere will only be enhanced by the use of these remarkable instruments, each of which has an incredible story,” said Alan D. Valentine, Nashville Symphony president and CEO. “We are grateful for the NEA’s support in helping us share this important piece of music, which promises to be a highlight of our season and a special addition to the Nashville Symphony’s discography.”

Praised by The New York Times as “a leader of contemporary American lyricism,” Leshnoff ranks as one of the most frequently performed living American composers and boasts an extensive catalog spanning symphonies, oratorios and chamber works. He will travel to Nashville to collaborate with the orchestra in its preparation for the concerts and the recording project.

Announced in September 2017, Violins of Hope Nashville is community partnership spearheaded by the Symphony and the Jewish Federation of Nashville and Middle Tennessee. This collection of instruments – which have been the subject of a best-selling book and a lauded documentary – will arrive in Nashville in March and serve as the centerpiece of a months-long initiative, with more than 25 local organizations presenting concerts, performances, exhibits, lectures and more designed to cultivate a citywide dialogue around music, art, social justice and free expression. For more information, including a comprehensive list of all upcoming events, visit ViolinsOfHopeNashville.com.

The Art Works category is the NEA’s largest funding category and supports projects that focus on the creation of art that meets the highest standards of excellence, public engagement with diverse and excellent art, lifelong learning in the arts and/or the strengthening of communities through the arts.

The GRAMMY® Award-winning Nashville Symphony has earned an international reputation for its innovative programming and its commitment to performing, recording and commissioning works by America’s leading composers. The Nashville Symphony has released 28 recordings on Naxos, which have received 24 GRAMMY® nominations and 13 GRAMMY® Awards, making it one of the most active recording orchestras in the country. The orchestra has also released recordings on Decca, Deutsche Grammophon and New West Records, among other labels. With more than 140 performances annually, the orchestra offers a broad range of classical, pops and jazz, and children’s concerts, while its extensive education and community engagement programs reach 60,000 children and adults each year.