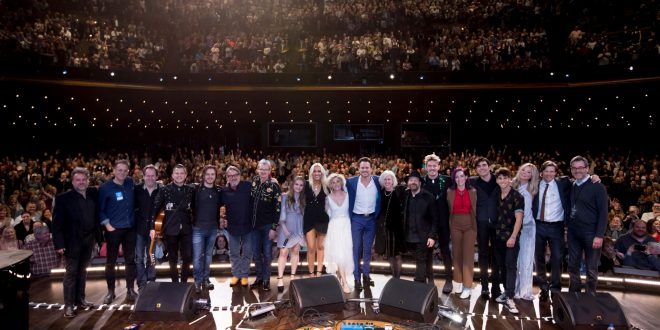 The cast had the crowd on their feet from opening number “Even If It Breaks Your Heart” as Clare Bowen, Chris Carmack, Charles Esten, Jonathan Jackson, Sam Palladio, Lennon Stella, Maisy Stella hit the stage giving their hometown crowd a taste of what the night would bring and a kick off to the celebration and thank you to the fans and the city of Nashville.

“You guys have been unbelievable. I don’t just mean now, I mean for six years,” said Charles Esten. “There’s something about our show that seems to have meant something to you. Yes, there was the drama and the craziness and we can serve that up any day, but there was something about the heart of this show that seems have to have reached in to you guys and touched you. That is the most rewarding part to us. Even though the show is ending now I want you to take it with you in your hearts.  Anytime you want to go right back to NASHVILLE you pull up that music and you put it in your headphones, in your homes in your hearts and you remember us, and you come on back to this Nashville and we will be all over this town as well.”

“The concert put a direct spotlight on what has made NASHVILLE’s six seasons so special – an amazingly talented cast and great songs,” said Steve Buchanan president, Opry Entertainment. “From simply stunning individual performances to multiple collaborations, it was wonderful to further witness the growth of every cast member who has been with the show from the start.”

Other highlights of the NASHVILLE In Concert: Final Season Celebration included the cast performing the popular songs from the series as well as some of their own original music. The NASHVILLE In Concert Final Season Celebration featured solo performances including a rousing standing ovation for Jackson’s performance of the classic “Unchained Melody” and Esten’s powerful “Good Rain or Jesus.” Bowen moved the crowd with her performance of the series hit “When The Right One Comes Along,” Palladio on “Adios Old Friend” and more. But the cast showed their unparalleled talents while collaborating together on performances throughout the 2+ hour concert including including Palladio, Jackson, Carmack and Blake together to perform “Go With It,” Lennon & Maisy on “Lean On” and “In Love” and Jackson, Palladio and Bowen on “Borrow My Heart.” Blake, Carmack, Palladio and Jackson brought the house down “Smoking the Boys.”  Esten, Bowen and Lennon and Maisy Stella came together on the endearing “Friend of Mine.”

The night began just like it started with the crowd on their feet for the encore and emotional performance of “A Life That’s Good” featuring all of the performers and the fans saying one last farewell.

Cast members Clare Bowen, Chris Carmack, Charles Esten, Jonathan Jackson and Sam Palladio will head to the UK and Ireland in April for the NASHVILLE Farewell Tour. The shows will feature songs from the series as well as artists’ original material. Tour stops on the Farewell Tour include Birmingham, Leeds, Glasgow, Manchester, Cardiff, London, Dublin and Belfast.

Music editor for Nashville.com. Jerry Holthouse is a content writer, songwriter and a graphic designer. He owns and runs Holthouse Creative, a full service creative agency. He is an avid outdoorsman and a lover of everything music. You can contact him at JerryHolthouse@Nashville.com
Previous Luke Bryan Scores 20th Career Number One
Next Uncle Dave Macon Days Festival Announces Featured Performers