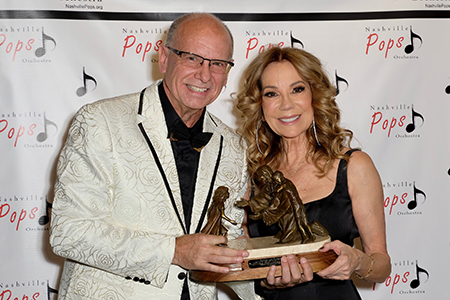 The Nashville Pops Orchestra presented playwright, producer, singer, songwriter and actress, Kathie Lee Gifford, with a Lifetime Achievement Award in recognition of her voluminous accomplishments with focus on the difference she has made in the lives of others and making the world a better place. A devoted humanitarian, Gifford lends support to numerous children’s organizations including Childhelp and the Association to Benefit Children, which spawned Cassidy’s Place and Cody House, named after her two children. She recently debuted three new songs, “Love Me to Death”, “He Saw Jesus” and “Jesus Is His Name” with Grammy-winning songwriter, Brett James. Each song debuted #1 on iTunes. She has just wrapped principal photography on Then Came You, a film she has written, produced and starred in alongside Craig Ferguson. The inaugural gala event, An Evening With Kathie Lee Gifford, was held at the Musicians Hall of Fame and Museum on Saturday, Nov.16 benefitting the The Bright Horizons Award.

The Nashville Pops Orchestra’s 1,000 Voices of Christmas at the historic Ryman Auditorium on Sunday, Nov. 17 featured some of the best Christmas music with full orchestra, large video screen and harmonious choir of nearly 1,000 voices.
The winner of the Bright Horizon Award was Lydia Burton a student from Cookeville High School and Choral Director Michael Choate. The award was presented by Kathie Lee Gifford and Nashville Pops Orchestra Conductor, Jeff Bown on the Ryman stage.

“What a lovely surprise to receive such an honor. Working with these enormously talented Nashville musicians is one of the great joys of my life. My father told me at a very young age, “Sweetheart, you’ve got to learn to make your own music.” It’s taken a lifetime, but here I am. Thank you to Jeff Bown and the Nashville Pops Orchestra.” expressed Kathie Lee Gifford.

“Thank you to all the performers who played critical roles in making last night a tremendous success. This could not have happened with out the support of 60 organizations around the state, stated Nashville Pops Orchestra Conductor Jeff Bown. “My deepest thanks to the students, high schools and church choir members. All my love to each of you.”

Music editor for Nashville.com. Jerry Holthouse is a content writer, songwriter and a graphic designer. He owns and runs Holthouse Creative, a full service creative agency. He is an avid outdoorsman and a lover of everything music. You can contact him at JerryHolthouse@Nashville.com
Previous Bluegrass Underground Announces Artists For PBS Tapings
Next Jack Schneider Makes Opry Debut With Help From Vince Gill