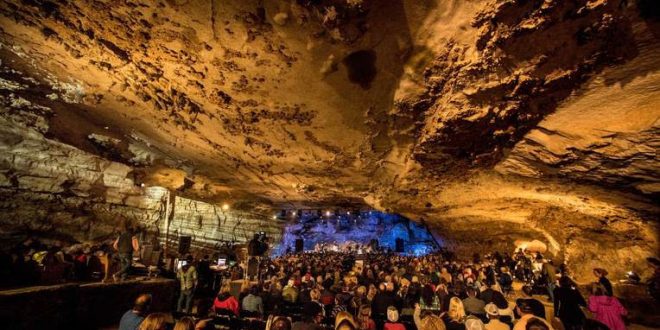 Bluegrass Underground announced today the artists for the TV taping of its milestone Season X on PBS. From March 27 through March 29, the Bluegrass Underground PBS TV will tape in The Caverns. This special 10th anniversary taping features artists like Asleep At The Wheel and Blind Boys of Alabama to rising stars like groove-driven jam band Goose, psychedelic soul Black Pumas, cutting-edge singer-songwriters Cam, Yola, Courtney Marie Andrews and Sam Lewis, harmonious duos Mandolin Orange and three-time GRAMMY nominated Milk Carton Kids as well as instrumental fireworks from bluegrass phenom, Molly Tuttle , and a surprise act to be announced in the coming weeks.

Jam-packed into one epic weekend of underground concerts, the performances will be captured for the 10th anniversary of the multiple Emmy Award-winning Bluegrass Underground series on PBS. To be at the 3-day live taping event is a music lover’s ultimate experience. The milestone Season X of Bluegrass Underground will premiere in the Fall of 2020 on PBS stations nationwide.

“It’s amazing that Bluegrass Underground is the second-longest music series on American Television,” says Todd Mayo, Bluegrass Underground creator and co-producer. “And we look forward to the next 10 years of partnering with PBS in presenting the quality and diversity of roots music from one of the most iconic music destinations in the world, The Caverns in Grundy County, Tennessee.”

Music editor for Nashville.com. Jerry Holthouse is a content writer, songwriter and a graphic designer. He owns and runs Holthouse Creative, a full service creative agency. He is an avid outdoorsman and a lover of everything music. You can contact him at JerryHolthouse@Nashville.com
Previous Indie Rocker BREE Releases “New Skin”
Next Nashville Pops Orchestra Presents Kathie Lee Gifford With Lifetime Achievement Award