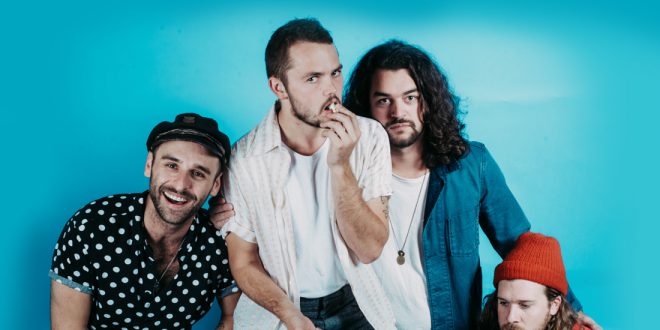 Meet Nashville rockers, Future Thieves. Young musicians come to Nashville to chicken-pick and twang. They come to sing about trucks, girls, and girls in trucks. Not so with Future Thieves. They came to rock. In that brief time, they’ve stirred up plenty of attention from fans throughout Music City and the US. The band has grown through continuous touring that is creating a buzz from their live performances, some that include Bonnaroo and Summerfest among others. Playing live is one the essential elements to Future Thieves’ creative process. The band released their debut album Horizon Line (released in 2015) and then recently Live at Blue Rock that was a collection of melodic rock, high energy Americana songs from their debut album with four new tracks.
They premiered the music video on Jimmy Fallon’s Tumblr Page for the single “Sucker” here. They released the track on Billboard here: http://www.billboard.com/articles/columns/rock/7709307/future-thieves-new-song-sucker-listen and have been featured on Conan’s TeamCoco.com / Relix / Guitar World /iHeart (Elvis Duran is a fan) / Alt Press / Music Connection just to name a few.
“Sucker” is a preview to what is in store for there new album. Now with the new year ahead, be on the look out for new music. Future Thieves are Elliot Collett (vocals/Guitar), Austin McCool (Guitar), Nick Goss (Bassist), and Gianni Gibson (Drums).
You can catch Future Thieves playing their 3rd annual Christmas Show at The Basement East on December 16th . It’s a free show with $1 beers.