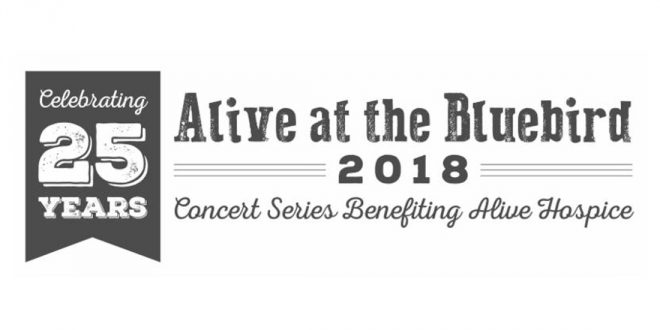 ALIVE AT THE BLUEBIRD CELEBRATES 25 YEARS

The 25th Annual Alive at the Bluebird concert series kicks off 2018 with a month of shows benefitting Alive Hospice at The Bluebird Cafe. More than 130 artists and songwriters are scheduled to perform at least 27 shows beginning Tuesday, January 2 and running through February 1, 2018. Presenting sponsors for the event include Bass, Berry & Sims, Cigna, HCA, Hub International, Jackson National and Tennessee Oncology. SouthComm and WSM-AM return as media sponsors.
“We are thrilled to mark the 25th anniversary of Alive at the Bluebird with such an amazing roster of talent,” said Anna-Gene O’Neil, Alive Hospice President/CEO. “I am also super-excited to partner with our good friends at the Bluebird in celebration of their 35th year. We are beyond grateful for the incredible support that we get from the songwriting community, our sponsors and the public. Alive at the Bluebird is a truly unique partnership-talk about a Nashville original! The proceeds directly benefit patients and family, but the entire program that runs throughout the month brings much-needed awareness to the important work that our mission supports.”
Perennial favorites Amy Grant and Vince Gill are scheduled to perform on January 3, 2018, and such luminaries as Kim Carnes, Phil Vassar, Styx lead guitarist and vocalist Tommy Shaw, John Oates, Beth Nielsen Chapman, Keb’ Mo’, Gordon Kennedy, Dave Barnes, Hunter Hayes, Kathy Mattea, Jon Vezner and Don Henry are already booked to appear. Additional writers and artists will be announced in the coming weeks.
“Every year, Alive at The Bluebird gives the month of January a very special energy here at the club,” said Bluebird Cafe General Manager Erika Wollam Nichols. “Our community of songwriters is inspired and moved by the great service that Alive Hospice provides – this inspiration is reflected in the number of people who volunteer their time and talent to raise funds and awareness through the month of performances. We are honored to have partnered with Alive Hospice for 25 years and can’t imagine a January without this amazing performance series that lights up The Bluebird with love and generosity.”
The 25th Annual Alive at the Bluebird shows benefitting Alive Hospice will take place Tuesday, Wednesday and Thursdays at 9:00pm, Fridays at 9:30pm and Saturdays at 6:30 and 9:30pm. Reservations and updated schedules and lineups can be found atwww.BluebirdCafe.com.
The Bluebird Cafe opened in June of 1982 and has been celebrating its 35th anniversary with special shows and events. Bluebird: The Movie, an in-depth documentary about the influence the tiny 90-seat venue has had on singers, songwriters and popular music in general, is currently in production.