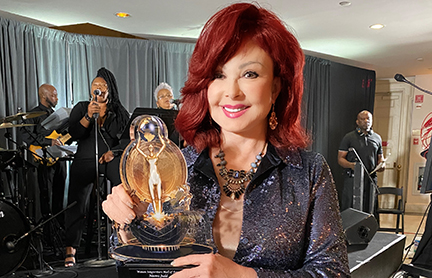 The Women Songwriters Hall of Fame inducted Naomi Judd during its first ceremony at the National Museum of Women in the Arts. The event paid homage to women whose body of work represents the best of heritage and legacy of modern American music.

“It’s always gratifying when someone acknowledges your best efforts. I love expressing my deepest feelings as I did in writing ‘Love Can Build A Bridge.’ Not only was I being celebrated at this auspicious event in Washington, D.C., I was among other accomplished songwriters. It was fun to reconnect with Valerie Simpson of Ashford & Simpson fame. We met years ago. A good time was had by all!” Naomi Judd shared.

Recently, Judd acted and starred in Lifetime’s V.C. Andrews’ Ruby, a four-party movie series that followed Ruby Landry, who after being raised by her loving spiritual healer grandmother (Judd) in the Louisiana bayou, is ensnared in a world of dark family secrets and betrayal, upon discovering that she has another family living in New Orleans.

Music editor for Nashville.com. Jerry Holthouse is a content writer, songwriter and a graphic designer. He owns and runs Holthouse Creative, a full service creative agency. He is an avid outdoorsman and a lover of everything music. You can contact him at JerryHolthouse@Nashville.com
Previous Alabama To Kick Off “50th Anniversary Tour” In Nashville
Next Trace Adkins Set To Release 25th Anniversary Album