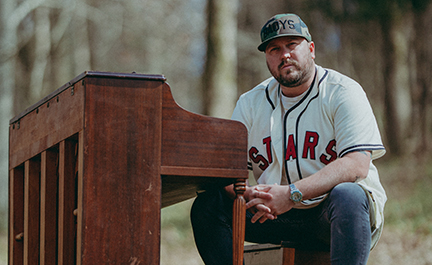 Nashville native and singer/songwriter Mitchell Tenpenny has joined the Music Industry Advisory board for Music City Baseball. The singer showcased his involvement through a newly released video for the piano version of his song “Bucket List.” The song currently has over 18 million on-demand streams. Watch the video above.

In the video, Tenpenny is shown rocking his vintage “Nashville Stars” jersey, which pays homage to the legendary Negro Leagues teams who played in Nashville in the 1940s prior to the integration of Major League Baseball.

Tenpenny, who wrote the song with Chris DeStefano and Laura Veltz, hopes to encourage his fans to broaden their yearly resolutions into life goals, ‘love a little more, dream a little deeper.’

“Bucket List,” which was released earlier this year, is about living every day to the fullest. While filming the song’s original video in Arizona, he was able to check off a few of his bucket list items and now he’s adding a major item to the list – bringing Major League Baseball to his hometown! “Growing up in Nashville, it’s always been a dream to have a Major League team here. This city is perfect for it. I am excited to get involved and actively pursue this item on my bucket list,” said Tenpenny.

“Having a Nashville native on our team is really important to us because we want the Nashville Stars to be deep rooted in the community. Mitchell knows the city like the back of his hand and has a passion for baseball. We are honored to be included in his music video and look forward to having him join our team,” said John Loar, Managing Director of Music City Baseball.

Music editor for Nashville.com. Jerry Holthouse is a content writer, songwriter and a graphic designer. He owns and runs Holthouse Creative, a full service creative agency. He is an avid outdoorsman and a lover of everything music. You can contact him at JerryHolthouse@Nashville.com
Previous Thomas Rhett Announces “The Center Point Road Tour”
Next WATCH: Charlie Worsham’s “Fist Through This Town”