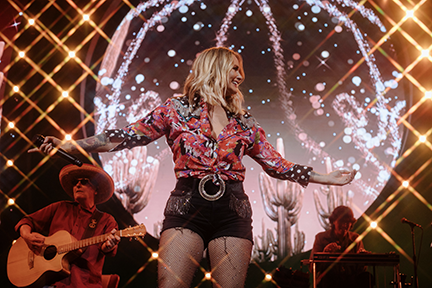 Palomino, the eighth solo album from Miranda Lambert also has the distinction of being the Top-Selling Country Album in Both the U.S. and U.K. and it marks Lambert’s Seventh
Top 10 on the All-Genre Billboard 200 making the project the highest-debuting country album of 2022. 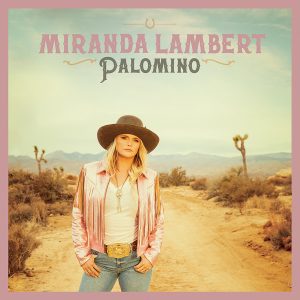 Reigning ACM Entertainer of the Year and three-time GRAMMY winner Miranda Lambert’s critically acclaimed eighth solo album, Palomino, is the top-selling country album in both the U.S. and the U.K. this week, earning the Texan the No. 4 spot on the all-genre Billboard 200, her seventh entry in the chart’s top 10 and making the project the highest-debuting country album of 2022. Listen HERE.

Following 2019’s critically acclaimed release of her GRAMMY Award-winning album, Wildcard, the Texas native ushered in her next musical era with the recent release of Palomino lead single “If I Was a Cowboy” (currently climbing the Top 20 at Country radio), while also adding her voice to Netflix’s new season of Queer Eye with inclusive anthem “Y’all Means All.” She is set to hit the road on The Bandwagon Tour with Little Big Town this spring and will kick off her Velvet Rodeo Las Vegas residency at the Zappos Theater at the Planet Hollywood Resort & Casino in September.

The most decorated artist in the history of the Academy of Country Music, Lambert has earned 37 ACM Awards (including the current ACM Entertainer of the Year title and a record-setting nine consecutive Female Artist of the Year Awards), 14 CMA Awards, three GRAMMY Awards, the Nashville Symphony Harmony Award, ACM Gene Weed Milestone Award and ACM Song of the Decade Award, plus was named 2019’s RIAA Artist of the Year. She is the youngest artist ever to serve as the Country Music Hall of Fame & Museum’s Artist in Residence, joining a legendary list of predecessors including Kris Kristofferson, Guy Clark, Tom T. Hall, Jerry Douglas and more.

Music editor for Nashville.com. Jerry Holthouse is a content writer, songwriter and a graphic designer. He owns and runs Holthouse Creative, a full service creative agency. He is an avid outdoorsman and a lover of everything music. You can contact him at JerryHolthouse@Nashville.com
Previous WATCH: Cody Jinks’ “Hurt You”
Next LISTEN: Trey Lewis’ “Whatever She Sees in Me”