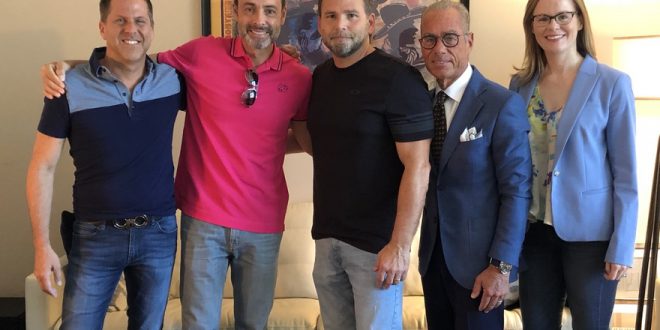 BMG has entered into a new label venture deal with award-winning Country music producer Michael Knox. Knox, most noted as the producer of Broken Bow Records’ Country superstar Jason Aldean, will look to develop, sign, and release up-and-coming artists through Music Knox Records, a new imprint backed by BMG.
With 21 Number Ones, over 40 million singles and 18 million albums sold throughout his career as a producer, Knox is best known for discovering Aldean in 1998 and subsequently serving as the producer of every one of his albums. Some of the many production credits to his name include Thomas Rhett, Kelly Clarkson, Ludacris, Trace Adkins, Luke Bryan, Eric Church, Miranda Lambert, Michael Tyler, music featured on the hit ABC television series Nashville, as well as his father, the late, great Buddy Knox (‘Party Doll’ fame 1957), among others.
Said Knox, “I know this sounds cliché, but it’s a dream come true for me. I’m excited to work with Zach, Jon and the entire BMG family. Considering our history together, I couldn’t imagine a better team to work with on this exciting new venture.”
Zach Katz, President, Repertoire & Marketing, BMG US, said, “Michael’s work speaks for itself. As one of the most successful and in-demand producers in Country music, he has had a hand in helping artists navigate and achieve success throughout every stage of their careers – from discovery to development to multi-platinum chart hits. Michael has an ear for the best up-and-coming artists inside and outside of Nashville; we are excited to show the world what he brings to the table next.”
Jon Loba, EVP, BBR Music Group, said, “ I’ve known and worked with Michael since the early days of BBR. He is one of the best song executives in this town and has always had a burning desire to find and develop diamonds in the rough before they move to the 615. We are so thrilled to partner with him in that endeavor.”
In 2011, Knox was awarded the CMA Award for his work as producer of the CMA Album of the Year, My Kinda Party (Jason Aldean), as well as three ACM Awards for his production of the 2012 ACM Single Record of the Year and Vocal Event of the Year, ‘Don’t You Wanna Stay’ (Jason Aldean/Kelly Clarkson), and the 2013 ACM Musical Event of the Year, ‘The Only Way I Know’ (Jason Aldean/Luke Bryan/Eric Church).
Knox currently serves as Vice President for peermusic Group in Nashville, is on the ACM Board of Directors, and recently launched his own syndicated radio show KNOX Country 360. Previously he served on GRAMMY Special Committees and the CMA Board of Directors.

Music editor for Nashville.com. Jerry Holthouse is a content writer, songwriter and a graphic designer. He owns and runs Holthouse Creative, a full service creative agency. He is an avid outdoorsman and a lover of everything music. You can contact him at JerryHolthouse@Nashville.com
Previous HOF Announces Judds Exhibit Coming Aug. 10
Next Florida Georgia Line Make Billboard History