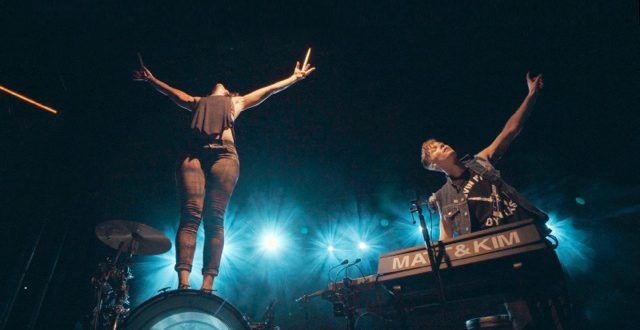 Matt (Johnson) and Kim (Schifino) started playing together as a band in 2004 after meeting as students at Pratt Art Institute in NY. The duo just announced the release of their sixth studio album out this Spring on the FADER Label. It’s their first LP in 3 years following a challenging year after Kim suffered an onstage injury in early 2017. During their usual high-energy performance in Mexico, Kim tore her ACL and the band was forced to take a year off from touring — the longest they have ever stayed off the road — and used the time during Kim’s extensive recovery to create one of their most personal albums to date, with writing beginning just one week after Kim’s surgery.
In addition to multiple successful album releases, Matt and Kim have become the go-to live band for raw exuberance and dance-ready anthems and have performed at Bonaroo. Billboard says, “their honestly creates a bond with an audience that wants to know as much as it can about their favorite musicians. And you don’t want to miss a moment.” The band has performed sold-out headlining tours across North America and wowed fans around the globe.
Matt and Kim are also viral video stars with over 50 MILLION YouTube views and counting, from innovative music videos to a regular vlog “Matt and Kim Show Ya Stuff” which allows fans a personal glimpse into their lives off the stage. Their single “Daylight” has earned Matt and Kim a Gold Record and their “Lessons Learned” video earned them an MTV Woodie Award for “Breakthru Video”.
MATT AND KIM @MARATHON MUSIC WORKS
MONDAY, MARCH 26
Doors 7pm, Show 8:30
Tickets: $30
All Ages
Tickets:  https://www.ticketfly.com/purchase/event/1626947
Venue Address: 1402 Clinton St