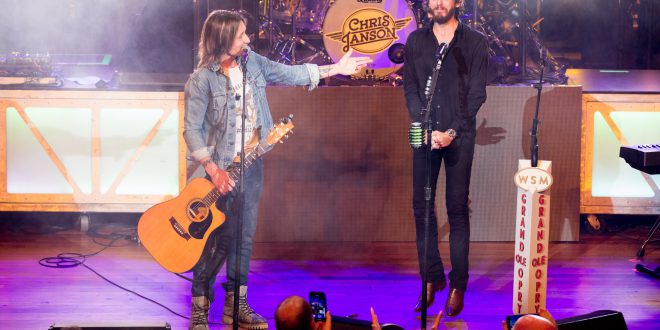 Chris Janson was surprised during his sold-out Ryman Auditorium concert tonight by Opry member Keith Urban with an invitation to become an official Grand Ole Opry member. Urban surprised the Ryman audience by performing alongside Janson on the John Michael Montgomery hit “Sold,” a tune on which the two had collaborated on the Opry stage last year. Afterwards, Urban said, “Chris it’s amazing for you to have a sold-out show at the Ryman. It’s one of my most favorite places in the world to play. I remember when I was invited to a member of the Grand Ole Opry here, so well, it’s only natural I say we would like to invite you to be the newest member of our family!”
To the standing room only crowd an overwhelmed Chris said, “The Opry is where my heart is. I could probably die if I never got to do anything else.”
While Janson’s next Opry appearance is scheduled for February 20, his formal Opry induction will be scheduled for later this spring. Fans can watch Janson and Opry social media channels for induction details.
“Over the course of more than 100 appearances since his Opry debut in 2013, Chris has become a favorite of Opry fans and fellow performers alike,” said Opry General Manager Sally Williams. “It’s been amazing to watch him bring audiences to their feet night after night. He is so passionate about the Opry, including its rich history, the camaraderie it builds between generations of fans and artists, and its place in country music’s future. We could not be more thrilled to officially welcome him later this spring.”