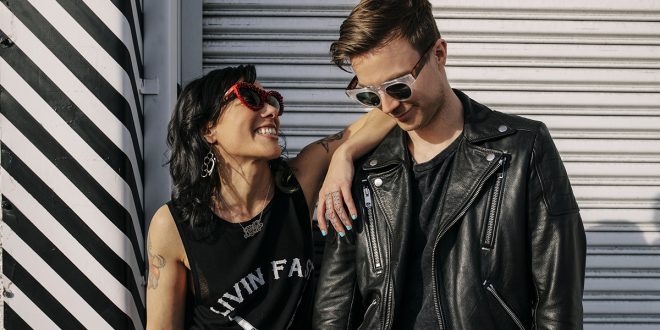 Matt and Kim To Play Live On The Green Sept. 1

Indie dance duo Matt and Kim bring their high energy live show back to Nashville to play  Live On The Green MainStage on Saturday, Sept 1. The Brooklyn duo are known for beat-driven anthems and explosive live shows and their headlining tour earlier this spring was no exception. Matt and Kim are ready to bring dance-ready hits from their back catalog as well as songs from their new album Almost Everyday back on the road for a fall tour which includes a stop in Nashville over Labor Day Weekend!
Tickets & info:  https://www.liveonthegreen.com
Matt (Johnson, keys) and Kim (Schifino, drums) met while art students in Brooklyn and their new album  ALMOST EVERYDAY was recently released (FADER Label). The album was written during Kim’s extensive recovery after an onstage injury in early 2017 sidelined the band and they used that time to create one of their most personal albums to date, with writing beginning just one month after Kim’s surgery. The album includes guest vocals by  Mark Hoppus, Kevin Morby, Santigold, SWMRS, Flosstradamus, King Tuff and more. Stream ALMOST EVERYDAY  here.
In addition to multiple successful album releases, Matt and Kim have become  the go-to live band for raw exuberance and dance-ready anthems. They won the mtvU Woodie Award for ” Best Live Performance”, have  sold-out headlining tours across North America, stole the show at multiple festivals including  Bonnaroo, Lollapalooza, Outside Lands, Bumbershoot and wowed fans around the globe. They’ve also performed on  Kimmel and  Fallon and toured with blink-182, Passion Pit and Ellie Goulding. Matt and Kim are also  viral video stars with over 50M views and counting.

Music editor for Nashville.com. Jerry Holthouse is a content writer, songwriter and a graphic designer. He owns and runs Holthouse Creative, a full service creative agency. He is an avid outdoorsman and a lover of everything music. You can contact him at JerryHolthouse@Nashville.com
Previous Brett Young Goes Two Weeks At Number One
Next Craig Morgan And Family Award Jerry Greer Memorial Scholarships