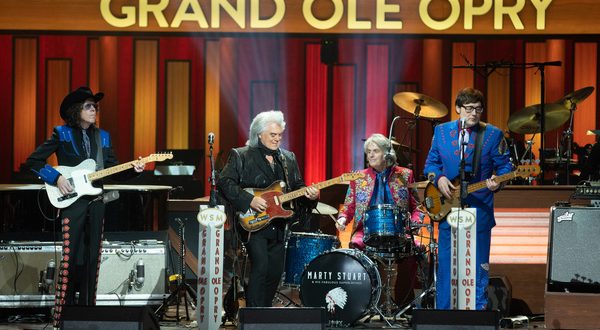 Marty Stuart celebrated his 30th Anniversary as a Grand Ole Opry member, and his 50 years in Nashville, on last night’s Opry. Earlier this week the the Country Music Hall of Famer was inducted into the prestigious Musician’s Hall of Fame. Stuart marked the milestone evening with the debut of his new song “Country Star.”

Other artists who appeared on the show to celebrate Stuart included The Del McCoury Band, Jason Crabb, Gary Mule Deer, Stuart’s band, The Fabulous Superlatives, Connie Smith, and a debut by Jontavious Willis.

The Grammy-winner first made his appearance on the Grand Ole Opry at the age of 13, just one week after joining legendary Country Music Hall of Famer and Opry member Lester Flatt’s bluegrass band as a mandolin player. Twenty years later, Stuart was inducted into the Opry family on November 28, 1992.

A one-hour portion of the night’s show aired live at 9/8 pm CT and will re-air tonight at 12/11pm CT, as Opry Live hosted by Natalie Stovall on Circle Television. The show will livestream via Circle’s social channels and be heard on SiriusXM’s Willie’s Roadhouse channel 59.

Music editor for Nashville.com. Jerry Holthouse is a content writer, songwriter and a graphic designer. He owns and runs Holthouse Creative, a full service creative agency. He is an avid outdoorsman and a lover of everything music. You can contact him at JerryHolthouse@Nashville.com
Previous Songwriter Tim James Re-Signs With Porchlight Music
Next LISTEN: War Hippies Release “O Holy Night”