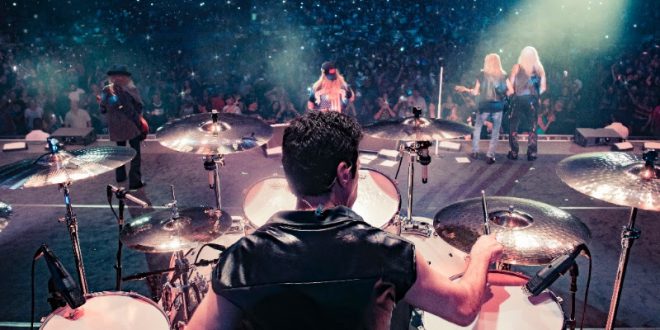 Southern Rock icons, Lynyrd Skynyrd, kicked off their Last of the Street Survivors Farewell Tour, presented by SiriusXM and produced by Live Nation, last night in West Palm Beach, Florida at the Coral Sky Amphitheatre, the fourth time since the 90s the band has started a tour at the seasoned outdoor shed if you ask guitarist Rickey Medlocke (his first show reunited with the band was on this very stage in 1995). The Rock & Roll Hall of Famer’s, joined by friends Jamey Johnson, Molly Hatchet and Blackfoot, started their two-year farewell tour with a resounding downbeat rocking the packed crowd that extended to the furthest boundaries of the grassy lawn.

The Last of the Street Survivors Farewell Tour marks a big moment for generations of fans, as the band has been touring consistently since the 90s. After a career that has spanned more than 40 years and includes a catalog of more than 60 albums with more than 30 million units sold, the band, that USA Today called the “whiskey-soaked genre’s most popular and influential crew,” is ready to rock one last time. The farewell tour will take original member Rossington joined by Van Zant, Medlocke, Mark “Sparky” Matejka, Michael Cartellone, Keith Christopher, Peter Keys, Dale Krantz Rossington, Carol Chase and special guest Jim Horn across the country over the next two years.

Original members Ronnie Van Zant, Bob Burns, Allen Collins, Gary Rossington, and Larry Junstrom formed the band in 1964, originally known as My Backyard, the band changed to its famous name in the early 1970s, and became popular in the Jacksonville, FL area, where the original members were from. They signed with Sounds of the South Records in 1972, and released their self-titled disc the following year. The album that featured “Free Bird,” arguably the most-recognized single in the Southern Rock genre, has sold more than 2 million units since its release. Later down the road the band recorded iconic tracks “Sweet Home Alabama” and “What’s Your Name.”

The band’s story took a tragic turn in October 1977 when a plane crash took the lives of Van Zant, Steve Gaines, backup singer Cassie Gaines, and several of their road crew. The band took a decade-long hiatus before reuniting for a tour and live album, Southern by the Grace of God. Since then, the band has toured and recorded extensively, with their most recent release being Last Of A Dyin’ Breed. The band’s current line-up includes original member Rossington, Johnny Van Zant, Rickey Medlocke, Mark “Sparky” Matejka, Michael Cartellone, Keith Christopher, Peter Keys, Dale Krantz Rossington and Carol Chase. The band was inducted into the Rock and Roll Hall of Fame in 2006.

Stay tuned for the announcement of additional dates for the second leg of the farewell tour.  We’re pretty sure there’s a Nashville date in there.

Music editor for Nashville.com. Jerry Holthouse is a content writer, songwriter and a graphic designer. He owns and runs Holthouse Creative, a full service creative agency. He is an avid outdoorsman and a lover of everything music. You can contact him at JerryHolthouse@Nashville.com
Previous Nashville Hit-Maker Gretchen Peters Performs At The HOF May 12th
Next Adam Doleac’s Loving Tribute To Mom And Dad