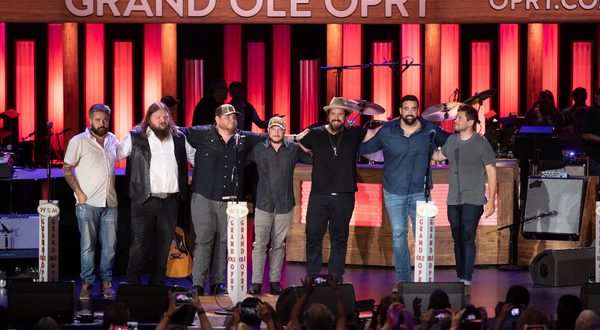 Multi-platinum singer/songwriter Luke Combs teamed with the Grand Ole Opry to create a rare & matchless moment on the Opry stage last night. Combs, who debuted on the Opry stage in 2016, chose to honor the collaborating songwriters from his Platinum-selling debut album This One’s For You and deluxe album This One’s For You Too to step into the circle and perform with him – turning the legendary stage into an unrivaled songwriting round reminiscent of where it all began for these songwriting friends. Several of the writers — Wyatt B. Durrette, Rob Synder, and Channing Wilson—appeared on the Opry for the first time with Combs, while Randy Montana, Jonathan Singleton, and Rob Williford were welcomed back to the stage to perform with Combs on hits they’d co-written.

“We all grew up listening to and loving the Opry,” said Luke. “When I called each writer and told them what was going to happen, it was what the Opry was all about.  We have always been the underdogs, and tonight the Opry fans, the diehard fans of country music, got to see a show that you couldn’t see anywhere else in the world. To see my buddies sing their songs has made tonight one of the most special nights I’ve had since moving here four years ago.”

Music editor for Nashville.com. Jerry Holthouse is a content writer, songwriter and a graphic designer. He owns and runs Holthouse Creative, a full service creative agency. He is an avid outdoorsman and a lover of everything music. You can contact him at JerryHolthouse@Nashville.com
Previous The Mavericks Announce First-Ever Christmas Album
Next Kenny Chesney’s “Live in No Shoes Nation” Goes Platinum