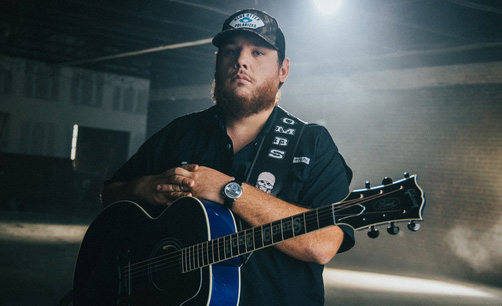 Luke Combs Makes History With 7 #1s From One Album

Newly-minted CMA Entertainer of the Year Luke Combs has once again made history as his latest single, “Cold As You,” is #1 on the Billboard Country Airplay and Mediabase/Country Aircheck charts this week. This is the seventh #1 to come from Combs’ deluxe album, What You See Ain’t Always What You Get—breaking the record for most #1 singles to come from the same album—as well as his twelfth-consecutive #1 single overall, another historic feat.

The accomplishment adds to yet another monumental few weeks for the 6x CMA, 3x ACM and 3x Billboard Music Award-winner, who won Entertainer of the Year at the 55th Annual CMA Awards, surprise-released his new song, “Doin’ This,” and debuted it live during the CMA Awards broadcast. A personal reflection on his own life and career, the song continues to receive widespread acclaim with Billboard praising, “the North Carolina native with the full-throttle voice and arsenal of hits has become an unstoppable force,” while Music Row declares, “His heart is so huge, and there are few in the format who are as completely relatable…A masterpiece.”

Moreover, Combs will embark on his first-ever headline stadium tour next year with performances at Denver’s Empower Field at Mile High on May 21, Seattle’s Lumen Field on June 4 and Atlanta’s Mercedes-Benz Stadium on July 30. See below for complete tour itinerary. Tickets for the shows are on-sale now, full details can be found at www.lukecombs.com/tour-dates.

Out now via River House Artists/Columbia Nashville, What You See Ain’t Always What You Get debuted at #1 on the all-genre Billboard 200 chart as well as Billboard’s Top Country Albums chart last fall. The deluxe edition features all 18 tracks from Combs’ double Platinum-certified, global #1 album, What You See Is What You Get, as well as five new songs. With the release, Combs reached #1 on Rolling Stone’s Top 200 Albums chart, Top 100 Songs chart and Artists 500 chart—the first country artist ever to lead all three charts in the same week and first to top the Artists 500.

Combs also recently made history as the first artist ever to have their first two studio albums spend 25 weeks or more at #1 on Billboard’s Top Country Albums chart—breaking Taylor Swift’s previously held record at 24 weeks. The achievement comes as What You See Is What You Get topped the chart for the 25th time last summer, while his 2017 debut, This One’s For You, has spent 50 non-consecutive weeks at #1—tying the record for the longest reign atop the chart with Shania Twain’s Come On Over in 1997.

Music editor for Nashville.com. Jerry Holthouse is a content writer, songwriter and a graphic designer. He owns and runs Holthouse Creative, a full service creative agency. He is an avid outdoorsman and a lover of everything music. You can contact him at JerryHolthouse@Nashville.com
Previous Carrie Underwood Ties Garth Brooks & Justin Bieber In AMA Awards
Next The 2022 Grammy Nominations Are In!