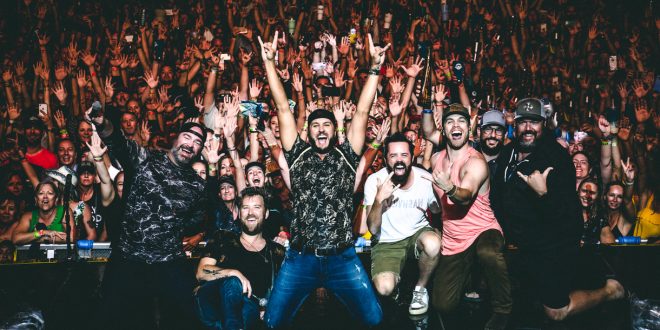 Luke Bryan wrapped his sixth consecutive sold-out Crash My Playa event in the Riviera Cancun region of Mexico on Saturday night. Luke headlined two of the four nightly concerts with Jason Aldean and Old Dominion headlining the additional nights. The event also included performances by Dustin Lynch, Lee Brice, Scotty McCreery, Granger Smith, Jordan Davis, Jon Langston, Tenille Townes, Caylee Hammack, Kendell Marvel and DJ Rock.
Crash My Playa 2020 kicked off last Wednesday with four fun filled days of performances with daily pool parties, nightly concerts and the addition this year of late-night party sets. Fans experience one of a kind performances from all the artists participating as they join each other on stage or hang out side of stage to watch the fun. Among the many guest and surprise appearances included Luke welcoming and introducing Old Dominion to their first headline Crash My Playa set, Dustin playing a marathon 3-hour pool party set, Charles Kelley (Lady Antebellum) making a surprise appearance at the festival performing a few songs with Luke and Jason, then Luke’s Mom LeClaire joining for a dance onstage and Dustin singing with Luke to close out the festival on the rainy final night.
Luke also filmed a new music video during his time in Mexico that will be out some time after his new album Born Here, Live Here, Die Here  is released on April 24.
Crash My Playa 2020 was hosted at just one resort for the first time at the Moon Palace Cancún which ranks among the best in the region on TripAdvisor. The four-night tropical getaway and concert experience was designed and produced by CID Presents as the ultimate all-inclusive Caribbean concert vacation. Guests were not only treated to poolside and nightly beachfront concerts, but were also provided with airport transportation, 24-hour concierge, optional daily activities and off-site adventures such as ATV’s and Zip Lines, Catamaran, Snorkeling, Deep Sea Fishing and more.  Plans for Crash My Playa 2021 are underway.

Music editor for Nashville.com. Jerry Holthouse is a content writer, songwriter and a graphic designer. He owns and runs Holthouse Creative, a full service creative agency. He is an avid outdoorsman and a lover of everything music. You can contact him at JerryHolthouse@Nashville.com
Previous Exclusive Video Premiere: Rivershine’s “Like That”
Next Bonnaroo Featured Artist: Megan Thee Stallion