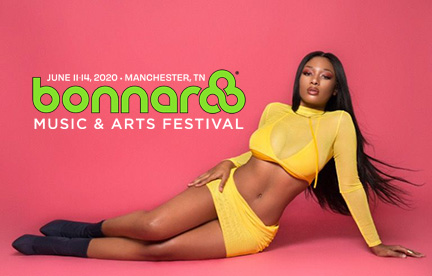 Starting today Nashville.com will be randomly featuring Bonnaroo 2020 performers. And who better to start with than Megan Thee Stallion? She’ll be performing on Friday 6/12. Coming off a “Hot Girl” vacation, Megan Thee Stallion is back in the studio and her latest track “B.I.T.C.H” just dropped. The song samples Tupac Shakur’s “Ratha Be Ya Ni**a” and was teased last week on Megan’s Instagram featuring her spitting bars and her hotties twerking in the back. “B.I.T.C.H” will be a featured track on Suga, Megan Thee Stallion’s debut album – following her other successful projects Fever and Tina Snow.

In the Suga era Megan will be introducing her fans to her next persona “Suga” coming off of Tina Snow and her Hot Girl Summer attitude, saying, “She’s besties with Tina Snow…it’s a big problem.” Megan also announced that Suga will include work with Kehlani – with more hot collaborations and surprises to be announced.

Megan Thee Stallion has had a standout 2019 and is bringing the heat in 2020. In just one year, Megan dropped the explosive 300 Entertainment / 1501 debut Fever, catapulting her to stardom, landing her with #1 songs at urban and rhythmic radio and appearances on SNL, NPR Tiny Desk, Jimmy Kimmel Live!, The Tonight Show Starring Jimmy Fallon!, E! News and the BET Hip-Hop Awards, where she took home the prize for Mixtape of the Year, and the MTV VMA’s where she won for Best Power Anthem. She was also awarded with Billboard’s Powerhouse Award at the annual Women in Music celebration, and included in Forbes 30 Under 30 and TIME 100. With now over 1B streams across all platforms and her single “Cash Shit’ featuring Da Baby certified platinum, it’s easy to see how the originator of “Hot Girl Summer” is quickly becoming a household name in hip-hop, pop, fashion, entertainment and beyond.

Music editor for Nashville.com. Jerry Holthouse is a content writer, songwriter and a graphic designer. He owns and runs Holthouse Creative, a full service creative agency. He is an avid outdoorsman and a lover of everything music. You can contact him at JerryHolthouse@Nashville.com
Previous Luke Bryan Wraps Up “Crash My Playa” 2020
Next The Wood Brothers Hit The Ryman On Valentine’s Day