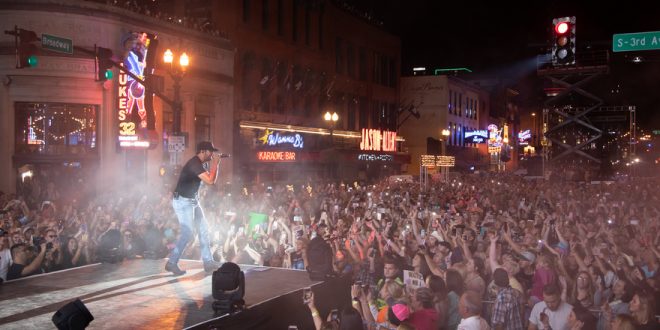 Luke Bryan performed a free concert for 30,000 fans in the heart of downtown Nashville last night for the grand opening celebration of his new bar, LUKE’S 32 BRIDGE FOOD + DRINK.

Yesterday, Luke and his wife Caroline cut a camouflage ribbon to christen the opening of the bar followed by a press conference for media where Luke talked about his excitement for the venue opening and playing for the fans tonight. Luke kicked off the press event with an acoustic performance of his 21st career #1, “Sunrise, Sunburn, Sunset,” that landed at the top of the country singles charts today.

After openers DJ Rock, Chelsea Field and Jon Langston performed, Luke took the stage and played a 90 minute set. Luke’s show included many of his #1 hits as well as a guest appearance by Ryan Hurd on “Sunrise, Sunburn, Sunset,” who wrote the current #1 single with Zach Crowell and Chase McGill. Multi-Platinum selling singer/songwriter Cole Swindell made a surprise appearance and performed his #1 hit “Ain’t Worth The Whiskey” with Luke and the pair covered Tim McGraw’s “Where The Green Grass Grows.”

Music editor for Nashville.com. Jerry Holthouse is a content writer, songwriter and a graphic designer. He owns and runs Holthouse Creative, a full service creative agency. He is an avid outdoorsman and a lover of everything music. You can contact him at JerryHolthouse@Nashville.com
Previous Phil Vassar & Lonestar Set For “The Not So Silent Night Tour.”
Next What You Need To Know About Americanafest