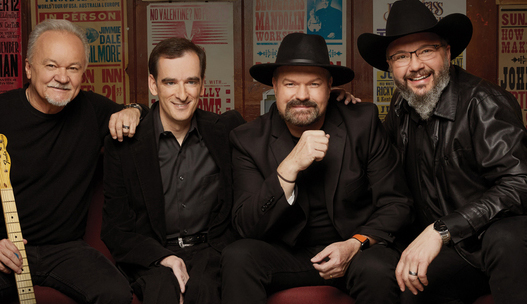 Brothers of the Heart

LISTEN: Brothers of the Heart’s “I’ll Go to My Grave Loving You”

“Being a part of this project has been so much fun,” stated Isaacs. “Not only do I get to produce, I also get to sing with three of the best singers and musicians ever. The song choices on this project are special to all of us; we feel that the songs have been a huge part of our pasts. I hope the listener enjoys the music and hears our love and passion in every song.”

The album’s debut track, the group’s reimagining of The Statler Brothers’ “I’ll Go to My Grave Loving You,” is available everywhere now. (listen above)

Following Brothers of the Heart’s debut album Brotherly Love with more than 31 million streams worldwide, the Listen to the Music record will be accompanied by a DVD and TV special.

Filmed at the iconic Studio A at The Grand Ole Opry and hosted by The Statler Brothers’ Don Reid, the TV special will debut on Thursday, January 19, at 6:30PM EST on RFD-TV with an additional airing on Saturday, January 21, at 6:00PM EST. Ths special will also air on PBS, TBN, Heartland, GaitherTV, FamilyNet, CTN, GMTN, Guardian, Liberty, TCT and TLN. In Canada, the special will air on Vision TV, CTS, The Miracle Channel, and Hope TV.

Music editor for Nashville.com. Jerry Holthouse is a content writer, songwriter and a graphic designer. He owns and runs Holthouse Creative, a full service creative agency. He is an avid outdoorsman and a lover of everything music. You can contact him at JerryHolthouse@Nashville.com
Previous Americana Announces Top 100 Radio Albums & Singles Of 2022
Next WATCH: Little Big Town’s “Rich Man”