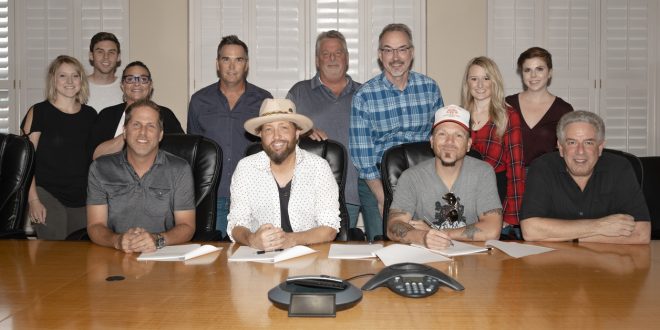 BBR Music Group/BMG announced today the signing of Country duo, LOCASH as the latest addition to its roster of artists. LOCASH’s Preston Brust and Chris Lucas, joined BBR executives at their Music Row offices for the signing (see photo). LOCASH has been assigned to the Wheelhouse Records imprint, where they will join labelmates, Trace Adkins, Granger Smith, Runaway June and Walker McGuire.
LOCASH, who is known for their high-energy live performances as much as their smash hits, cemented their place in Country music with GOLD-certified tracks like “I Love This Life” and their #1 chart-topper, “I Know Somebody,” which earned them nominations for ACM Awards for New Vocal Duo or Group of the Year, CMT Music Awards for Duo Video of the Year, and CMA Awards for Vocal Duo of the Year.
“LOCASH has accomplished so much on their own, people in the industry have really embraced them,” said Jon Loba EVP, BBR Music Group. “Their entrepreneurial spirit mimics our own and we are so excited to work with them and look forward to watching them soar.”
The pair has two albums and eight charting singles to their credit and has taken their talents on the road, performing for thousands of fans as part of their own headlining tour as well as in support of Tim McGraw and Faith Hill’s SOUL 2 SOUL Tour.
“We’ve known Loba for years and had our sights on BBR since before we signed our first deal but knew we had to get the timing right, now it just feels like all of the stars have finally aligned and this is where we’re supposed to be,” said Preston Brust of LOCASH. “It is a bit of a ‘pinch me’ moment, we’re such big fans of everybody on the roster and are honored to be named alongside such incredible artists.”
“They have put together an incredible team at BBR and with the full support of BMG behind them, there’s no better team to help take our career to the next level,” said Chris Lucas of LOCASH. “Talking with Zach Katz, who has made such an incredible impact on the music business and everybody on the BBR team, we could just immediately tell our music was going to be in the right hands and as a songwriter and artist, there is no better feeling.”
In addition to their own radio success, Brust and Lucas have penned hits for Country megastars like Keith Urban (#1 song “You Gonna Fly”) and Tim McGraw (PLATINUM-certified “Truck Yeah”).

Music editor for Nashville.com. Jerry Holthouse is a content writer, songwriter and a graphic designer. He owns and runs Holthouse Creative, a full service creative agency. He is an avid outdoorsman and a lover of everything music. You can contact him at JerryHolthouse@Nashville.com
Previous Paisley and Underwood Will Return To Host 52nd Annual CMA Awards
Next The Devil Makes Three To Drop “Chains Are Broken” on August 24th