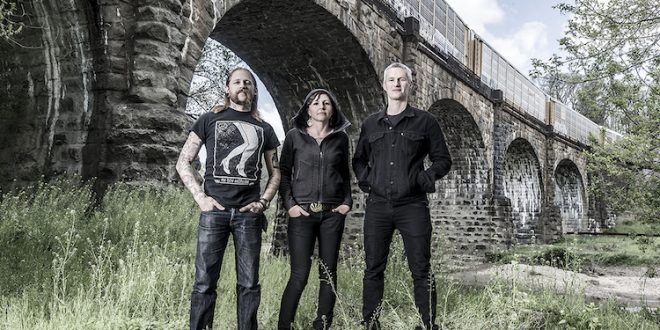 The Devil Makes Three are set to return with Chains Are Broken on August 24th via New West Records. The 11-song set was produced by Ted Hutt (Gaslight Anthem, Flogging Molly) and recorded at Sonic Ranch Studios in El Paso, TX. Chains Are Broken is The Devil Makes Three’s first album of original material since 2013’s I’m A Stranger Here, which debuted on the Billboard Top 200.

The new album follows their acclaimed 2016 collection of covers, Redemption & Ruin, which heralded the groups second #1 bow on the Billboard Top Bluegrass Albums Chart. Instead of their traditional revolving cast of collaborators in the studio, The Devil Makes Three stuck to its signature power trio of Pete Bernhard, Lucia Turino, and Cooper McBean – with one addition. This time, they invited touring drummer Stefan Amidon to power the bulk of the percussion and his presence remains most amplified as the band seamlessly translated the spirit of their must see live show into a studio recording.

Watch the video for the first single “Bad Idea,” which features the band’s recent headline performance at Red Rocks on May 25th below. Frontman Pete Bernhard told Billboard, “I think we just finally figured out after all this time how to record as a band. We were like, ‘Ok, that’s how it sounds live,’ which was big for us because we’re such a live band. We wanted to capture something more, and I think when we left the studio we were like, ‘God, we did it,’ which felt great.” Bernhard continued, “We’re always trying to be a rock band. Our approach to string band music has always been sort of punk rock; We’re playing string band music, but not in the traditional way.”

Music editor for Nashville.com. Jerry Holthouse is a content writer, songwriter and a graphic designer. He owns and runs Holthouse Creative, a full service creative agency. He is an avid outdoorsman and a lover of everything music. You can contact him at JerryHolthouse@Nashville.com
Previous LOCASH Signs With BBR Music Group
Next Carrie Underwood Announces “The Cry Pretty Tour 360”