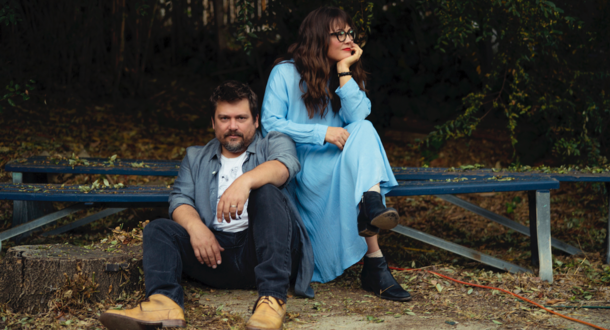 The song is the third track from the group’s new album, brother sister, which is due April 10 via Family Hour Records/Thirty Tigers. Their first release in five years, the album focuses on the musical and lyrical chemistry between Sara and Sean—the creative core at the center of the project. By carving out time to write together with the Family Hour in mind for the first time, they created a record that demonstrates their unique familial creative partnership while still harnessing the energy and honesty of their legendary live performances at Los Angeles’ Largo—the collective’s residency now in its 18th year.
Of the project, Sara shares, “It felt really good to dig into the potential of two people…the primary goal of this record became to see what we could do when it is just the two of us. The arrangements and the writing were all focused on that. Listening now, I’m really proud of what we did. These are songs that would not have come out of either one of us individually and it feels like a band sound, like this is what we do, the two of us.”
Produced by Mike Viola (Jenny Lewis, Mandy Moore, J.S. Ondara), brother sister features seven original songs co-written by Sara and Sean as well as three new covers: Courtney Hartman and Taylor Ashton’s “Neighborhood Name,” Warren Zevon’s “Accidentally Like A Martyr” and Charley Jordan’s “Keep It Clean,” which features special guest vocalists David Garza, Gaby Moreno and John C. Reilly.
The new album follows 2015’s self-titled debut, which mirrored the experience of their residency and featured special guests Fiona Apple, Don Heffington, Greg Leisz, Sebastian Steinberg and Benmont Tench.
In addition to Watkins Family Hour, Sara and Sean’s acclaimed projects include I’m With Her (Sara), Fiction Family (Sean), Nickel Creek with their friend and longtime collaborator, Chris Thile, as well as their successful individual careers.

Music editor for Nashville.com. Jerry Holthouse is a content writer, songwriter and a graphic designer. He owns and runs Holthouse Creative, a full service creative agency. He is an avid outdoorsman and a lover of everything music. You can contact him at JerryHolthouse@Nashville.com
Previous Craig Morgan Announces New Album
Next Charlie Daniels Reveals Volunteer Jam Lineup