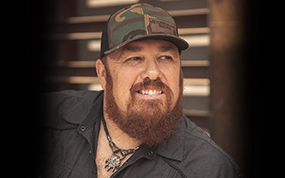 Black Sheep recording artist Michael Austin gets a little gritty in his latest single as he sings the praises of all things dirt in his brand new song, “God Made Dirt,” out now. (listen above)

The inspirational new tune reminds us just how important a little piece of land and some dirt can be and how key a part it plays in all of our lives, start to finish. From rolling in it as kids playing and four-wheeling through it as teens down back roads, to eventually working it and building a foundation and a life for our families, dirt is a building block of our lives, Austin reminds us in the upbeat new song, which he co-wrote with Tamara Laurel, Brian McKenna, and David Andrew Borys.

The new track can be found on Austin’s forthcoming album which was produced by Jimmy Ritchey and set for release early 2023.

Austin grew up in a small Missouri town (Cole Turkey Acres) and sang from a very young age. He even had his first paid gig at age 7, when a performer at a local establishment put the young singer up on stage promising to pay him if he sang well… well, Michael earned his first singing fee that day and has been singing ever since.

Music editor for Nashville.com. Jerry Holthouse is a content writer, songwriter and a graphic designer. He owns and runs Holthouse Creative, a full service creative agency. He is an avid outdoorsman and a lover of everything music. You can contact him at JerryHolthouse@Nashville.com
Previous Miranda Lambert Helps Shelter Pets Over Holidays
Next Becky Isaacs Recovering From Car Accident