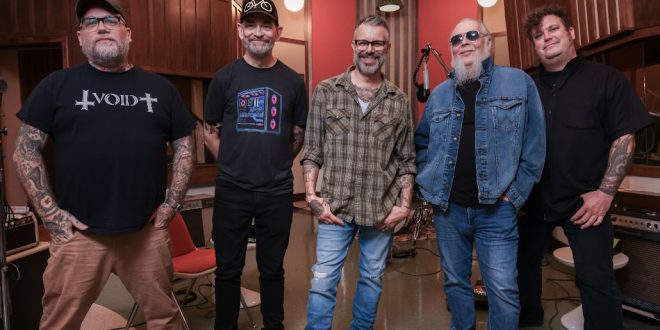 LISTEN: Lucero’s “Macon If We Make It”

Today, Memphis rock/alt-country band Lucero releases “Macon If We Make It” from the forthcoming album Should’ve Learned by Now, out February 24 via Liberty & Lament/Thirty Tigers. Inspired by an impending hurricane, the song draws parallels between a literal storm and a troubled relationship back home, before the listener is carried out like a raft on guitarist Brian Venable’s ripping guitar solo. The band has also announced two album release shows on February 24 in Memphis at Hernando’s Hide-A-Way and on February 25 at The End in Nashville.

“We were on tour in Georgia and a hurricane was coming through. Someone asked where our next show was and we said ‘Macon, if we make it,’” explains bandleader Ben Nichols. “I was aiming for a song kind of like Husker Du’s ‘Dead Set on Destruction.’ I don’t think I hit that mark but the song is fun to play and sing. It also has a kind of Violent Femmes vibe that I like. Their stuff was some of the first songs I learned to play on bass when I was 12 or 13 years old.”

Since forming in Memphis in the late 90’s, Lucero has evolved and embraced everything from southern rock to Stax-inspired Memphis soul, while maintaining their distinctive sonic foundations. A reflection of a band that knows itself, Should’ve Learned by Now sees the band returning to punchy driving rhythms and punk-rooted guitar licks after exploring darker, more atmospheric landscapes on their two previous releases. The group has shared three other singles from the album, with Rolling Stone declaring “One Last F.U. has the defiant, sneering energy of Lucero’s loudest recordings,” and BrooklynVegan saying “Buy a Little Time” finds them “sounding like Tom Petty jamming with Crazy Horse but in the way that only Lucero can.” Offering a glimpse at their quieter side, “Raining for Weeks” was hailed by Garden & Gun, who said the “ballad-like melancholy falls into equilibrium over jaunty piano, Nichols’s tenacious vocals, and old-school guitar drones.”

Led by the gravelly voice of singer/songwriter Ben Nichols, Lucero also features original members Brian Venable on guitar, Roy Berry on drums, John C. Stubblefield on bass and Rick Steff on keys. The group of Memphis road-dogs has maintained a large and dedicated fanbase for over 20 years, delivering a rowdy and communal live experience that is equally as exhilarating in a dive bar as it is in amphitheaters. NPR Music has called them “the rare kind of band with enough spirit to fill an arena, but with its heart planted firmly in the garage.”

Music editor for Nashville.com. Jerry Holthouse is a content writer, songwriter and a graphic designer. He owns and runs Holthouse Creative, a full service creative agency. He is an avid outdoorsman and a lover of everything music. You can contact him at JerryHolthouse@Nashville.com
Previous Stronger Than That – Brei Carter
Next Lake Street Dive Partners With PLUS1 To Donate Food