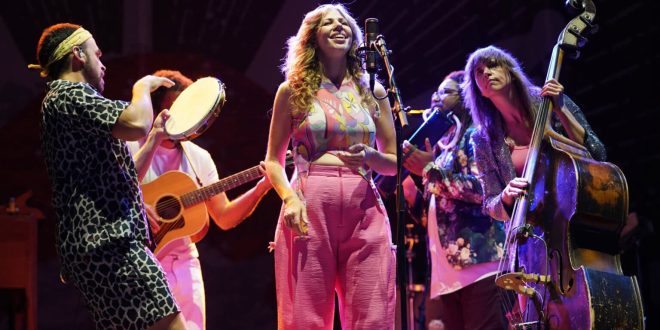 Lake Street Dive Partners With PLUS1 To Donate Food

Ahead of kicking off the band’s 2023 North American winter run with two shows at Nashville’s Ryman Auditorium, Lake Street Dive announced Tuesday that it is partnering with PLUS1 to donate $1 per ticket for all of its “Gather Round Sounds” shows in January and February to nonprofit Musically Fed. Musically Fed previously worked with the indie pop/soul band over the past year to help repurpose the group’s unused catering to feed the hungry – a win/win for assisting those in need and keeping extra food out of landfills.

The band has described the tour as “easy going, semi-acoustic evenings full of the fan favs, some deep cuts, and maybe even some works in progress in our most relaxed, basement couch setting yet.” Lake Street Dive’s most recent release is September 2022’s covers EP, Fun Machine: The Sequel. The year before the band released its seventh studio album, Obviously.

Lake Street Dive shared the news about the Musically Fed donation with a post on its Instagram Jan. 17: “We are thrilled to be partnering with @plus1org for our Gather Round Sounds Tour (which starts TODAY!!!). $1 per ticket will go to support @musicallyfed and their work mobilizing the music industry in the fight against hunger 🧡 So for everyone coming to these shows thank you for being a part of that. We’ll see you soon!!”
Musically Fed reposted the post and commented, “We are beyond thrilled to help @lakestreetdive repurpose unused meals from backstage on their upcoming tour that starts today! Thank you to @plus1org and all those who work behind the scenes to make our music industry more sustainable ❤️ #lakestreetdive #sustainability #fightagainsthunger #feedthehungry #foodinsecurity”

Maria Brunner, the owner of Insight Management, started Musically Fed in 2016 in honor of her late husband, who was a proud Vietnam veteran, to donate unused backstage catering to community organizations that feed veterans, homeless and those who are food insecure.

After the coronavirus pandemic brought live events to a halt and many production professionals suddenly found themselves out of work, Musically Fed shifted its mission to distributing food via COVID-safe drive-through events to help those in the music industry facing food insecurities.

Musically Fed worked with live industry executives including Jake Berry of Jake Berry Productions, Jeff Giek with Rhino Staging, Charlie Hernandez from the nonprofit Just a Bunch of Roadies, Insomniac Events’ Insomniac Cares (including Rutger Jansen) and Musically Fed board member Chad Schultz from Warner Music Group to put together drive-thru food distributions that started in Arizona and then expanded across the U.S. In addition to serving those in the live industry, Musically Fed also provided thousands of meals to depleted food pantries and nonprofits in markets including Atlanta, Minneapolis and Los Angeles.

When live events returned in full force in 2021 Musically Fed held its final drive-through food distribution in June 2021 and transitioned back to once again collecting backstage catering.
Box office reports submitted to Pollstar for Lake Street Dive include two shows at the Fox Theater in Oakland, Oct. 13-14, 2022, that sold 5,960 tickets and grossed $243,790.

Music editor for Nashville.com. Jerry Holthouse is a content writer, songwriter and a graphic designer. He owns and runs Holthouse Creative, a full service creative agency. He is an avid outdoorsman and a lover of everything music. You can contact him at JerryHolthouse@Nashville.com
Previous LISTEN: Lucero’s “Macon If We Make It”
Next Red Street Records Signs Singer/Songwriter Ryan Larkins