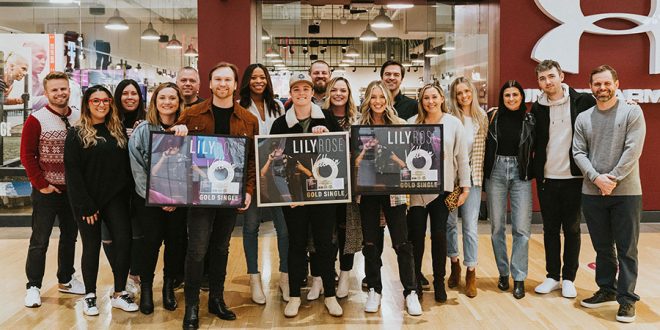 Lily Rose celebrates her first GOLD certification from the Recording Industry Association of America® for her single, “Villain.” Originally released on December 15, 2020, Rose was presented with her RIAA plaque exactly one year post-release in a full-circle moment outside her previous employer at Opry Mills mall in Nashville, TN. The coveted honor is awarded when songs achieve a combined sales and/or streams of 500,000.

“‘Villain’ has changed my life in more ways than one. The morning we wrote it, I had just finished an overnight shift stocking shelves at the mall, and it’s surreal to stand here a year after I released it with over 500,000 units sold, and the incredible writers and my team around me. Every time I step on stage and hear the fans singing my songs back to me, I’m reminded of why I do what I do. But looking at a plaque that says certified gold with my name next to it? It’s unlike anything I’ve ever felt before,” shares Rose. “The only reason why this is possible is because so many people were able to connect with a song that was so special to me, and for that I’m forever grateful.”

The Country trailblazer became an overnight sensation in December 2020 after years of working a string of odd jobs to fund her music career. After teasing the “Villain” on TikTok, the song written by Rose, Mackenzie Carpenter, Kyle Clark and produced by Matt Morrisey struck a chord on TikTok where it skyrocketed to over 5M views pre-release. Topping the iTunes US all genre chart for six days, the reactive song caught the attention of Back Blocks Music’s Rakiyah Marshall and quickly led to Rose signing her first record deal with Big Loud / Back Blocks Music and Republic Records in January 2021.

Recently named as part of Music Row’s “Next Big Thing Class of 2022” and CMT’s “Listen Up Class of 2022,” Rose looks ahead to next year as she gears up for her opening slot on Chris Lane’s nationwide FILL THEM BOOTS TOUR kicking off in January 2022.

Music editor for Nashville.com. Jerry Holthouse is a content writer, songwriter and a graphic designer. He owns and runs Holthouse Creative, a full service creative agency. He is an avid outdoorsman and a lover of everything music. You can contact him at JerryHolthouse@Nashville.com
Previous John Rich Gets A Hat-Trick
Next LISTEN: Brent Cobb’s “Just A Closer Walk With Thee”