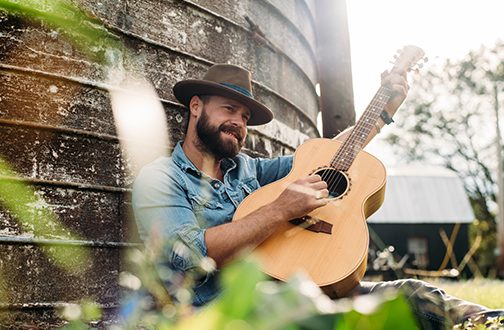 Lewis Brice covers a fresh take of the iconic 2000’s hit “Absolutely (Story of a Girl)” featuring John Hampson & Nine Days. 20 years after the song topped the charts as a No. 1 hit for Nine Days, Brice teams up with lead singer John Hampson for a re-imagined production with countrified flair that perfectly blends the two singers’ vocal style.

Hampson, who co-wrote the tune that now has more than 75 million streams on Spotify alone, has never re-recorded the nostalgic hit outside of the Nine Days band until now, sharing, “When we were in the studio recording the vocals, Lewis started singing the second verse and instantly, the song became something different for me. I felt like I was listening to a young modern version of John Mellencamp and I thought it was great. It’s a great pop song, and Lewis just brings a different and obviously more country vibe to it, but it honors it as a big pop song. I love what he did!”

“When I was first introduced to the idea of covering the song I was a little weary because it was such an iconic hit,” said Brice. “When I found out I would have the honor of recording it with John, I was all in! I’m stoked to be able to put my spin on such a huge song along with the man who wrote it. Working with John was such a pleasure, he is an incredibly talented artist and writer.”

Music editor for Nashville.com. Jerry Holthouse is a content writer, songwriter and a graphic designer. He owns and runs Holthouse Creative, a full service creative agency. He is an avid outdoorsman and a lover of everything music. You can contact him at JerryHolthouse@Nashville.com
Previous LISTEN: Willie Nelson Covers “That’s Life”
Next LISTEN: Kip Moore’s “How High”