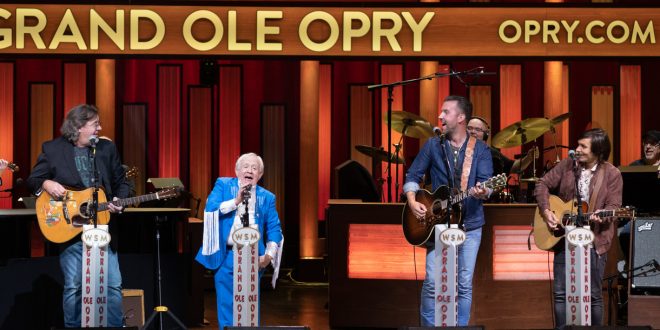 The Grand Ole Opry welcomed actor/writer/comedian/singer Leslie Jordan for his Opry debut Saturday night in front of a full capacity crowd. Jordan’s performance as well as those by Brothers Osborne, Vince Gill, and Charlie Worsham aired on Opry Live on the Circle Network. Jordan was joined onstage during his set by TJ Osborne, Gill, and Worsham. The group rounded out Jordan’s performance with the Opry standard “Will The Circle Be Unbroken”.

In addition to a full lineup of spring and summer performances, the Opry is set to release a limited-edition vinyl LP titled, Unbroken | Empty Room, Full Circle on June 4, 2021. The LP includes memorable performances by Luke Combs, Reba McEntire, Darius Rucker, and more recorded live from the Opry stage in front of an empty house during the 29 weeks that the Saturday night Opry shows continued uninterrupted during the early days of the COVID-19 pandemic.

Music editor for Nashville.com. Jerry Holthouse is a content writer, songwriter and a graphic designer. He owns and runs Holthouse Creative, a full service creative agency. He is an avid outdoorsman and a lover of everything music. You can contact him at JerryHolthouse@Nashville.com
Previous WATCH: Anderson East’s New Video “Drugs”
Next Songwriter Hall Of Famer Kent Blazy Drops New Album