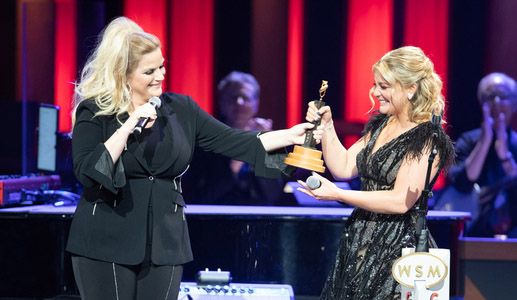 Singer/songwriter Lauren Alaina was officially inducted and welcomed as the newest member of the Grand Ole Opry last Saturday by her friend/mentor Trisha Yearwood. The Opry was the first major stage Alaina played just a week after she was named runner-up on Season 10 of American Idol, making her Opry debut on June 10, 2011. She has appeared on the Opry more than 50 times since.

“A lot of people love you,” said Yearwood before introducing a special video from another of Alaina’s musical heroes, Dolly Parton, welcoming her to the Opry family. “You and I have a lot in common,” said Parton via video. “We both started young, we love country music and we love the Grand Ole Opry and I’d give a million dollars if I could be there with Trisha and Garth and everyone who loves you to get you inducted into the Grand Ole Opry. I just want to wish you the best in your whole career.”

Yearwood continued “What I have gotten to observe in knowing you for the couple of years I have known you is how genuine you are. I think country music is in good hands. You are exactly the kind of artist that the Opry loves, and wants and looks for. Usually when someone gets inducted they say ‘it’s on behalf of all the members of the Grand Ole Opry,’ and I’m going to say that, but I also want to say every single person from the house band, to the crew, to who is parking cars, everybody tonight says how deserving you are and it’s about time. So on behalf of myself, all the members of the Opry, the crew and everyone who is associated with the Opry, you are now officially a member of the Grand Ole Opry, Miss Lauren Alaina.”

A tearful and emotional Alaina stood in the circle, saying “Ever since I was a little girl I dreamed of this moment. Both of my parents raised me with an appreciation for country music and all that it is, and all of the people who have come before me. I just want to say I promise to do everything I can to represent country music. I promise to represent this family well. I have felt like family here as long as I remember. Everyone at the Opry has always made me feel like family so for me to finally be officially in is the biggest dream come true of all time. Most little girls dreamed of their wedding; I dreamed of this. God Bless you guys and God bless country music.”

Yearwood surprised Alaina before their performance of  Yearwood’s classic “Walkaway Joe” introducing her husband, Garth Brooks, to the stage to play guitar for them.

Music editor for Nashville.com. Jerry Holthouse is a content writer, songwriter and a graphic designer. He owns and runs Holthouse Creative, a full service creative agency. He is an avid outdoorsman and a lover of everything music. You can contact him at JerryHolthouse@Nashville.com
Previous Joshua Ray Walker To Make His Opry Debut On April 15th
Next Brandi Carlile Expands “Beyond These Silent Days” Tour