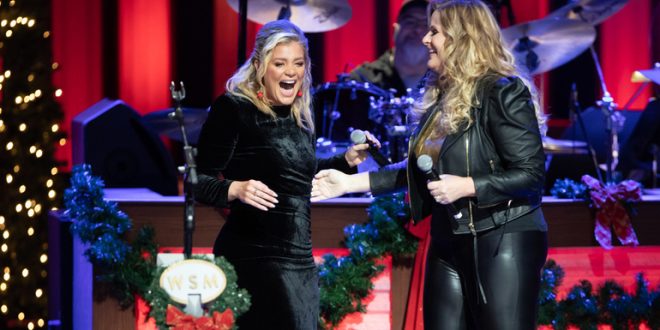 Lauren Alaina will officially become part of the Grand Ole Opry family on Saturday, February 12. Opry member and Alaina’s friend/mentor Trisha Yearwood, who surprised her onstage in December with the Opry invitation, will return to be part of Alaina’s induction.

The Opry was the first major stage Alaina played just a week after she was named runner-up on Season 10 of American Idol, making her Opry debut on June 10, 2011. She marked her 50th appearance on the Opry last Fall.

Alaina’s Opry induction can be seen on the Opry’s television broadcast home, Circle Network, and as part of its Saturday night Opry Live livestream on Circle All Access Facebook, Twitter and YouTube. It can also be heard onopry.com and wsmonline.com, SiriusXM: Willie’s Roadhouse, and its flagship home, 650 AM-WSM.

Yearwood duets with Alaina on her Gold-certified song “Getting Good” from her recent album Sitting Pretty On Top of the World and also wrote the foreword to her just-released Amazon best-selling inspirational book Getting Good At Being You.

Also scheduled to perform on Saturday, February 12 are Breland, The Isaacs, Riders In The Sky, and more to be announced.

Tags BRELAND Riders in the Sky The Isaacs Trisha Yearwood

Music editor for Nashville.com. Jerry Holthouse is a content writer, songwriter and a graphic designer. He owns and runs Holthouse Creative, a full service creative agency. He is an avid outdoorsman and a lover of everything music. You can contact him at JerryHolthouse@Nashville.com
Previous Gibson Guitar Celebrates 61 Years Of Iconic Guitar
Next Joanne Shaw Taylor Rocks The Franklin Theatre