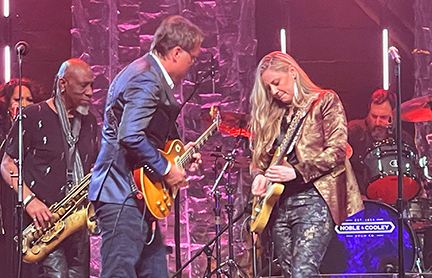 Blues rocker Joanne Shaw Taylor put on an amazing performance last night at the Franklin Theatre to a packed house. The show, which was taped for an upcoming PBS special and also a DVD included some very special guest. Kenny Wayne Shepherd, Mike Farris and her long time friend Joe Bonamassa all graced the stage at some point during the performance. Bonamassa and Josh Smith produced her newest release The Blues Album, a collection of blues and soul covers which was recored at Oceanway Recording Studios right here in Nashville. The Blues Album released on Bonamassa’s independent label Keeping The Blues Alive Records on September 24th and topped on the Billboard Blues charts giving Shaw her first #1.

Shaw was discovered by Dave Stewart of the Eurythmics at the age of 16 who, having watched her play, immediately invited her on the road with his supergroup D.U.P. – a career in music was born and in the proceeding years, her incredible guitar playing saw her build an army of plaudits including Jimmy Cliff, Joe Bonamassa, Stevie Wonder and Annie Lennox.

Her guitar chops explain why she has become one of the most sought-after players in the world of blues-rock. The Solihull, England native was inspired in her early teens to play the blues after hearing Stevie Ray Vaughan, Albert Collins and Jimi Hendrix. She released her first album on Ruf Records entitled “White Sugar” (2009), unleashing her distinct soulful voice on the world, and demonstrating a song writing prowess way beyond her years. Over the next few years, she released critically acclaimed albums including her sophomore album “Diamonds In The Dirt” (2010), “Almost Always Never” (2012) which featured the UK radio hit “Soul Station”, plus her final album for Ruf Records – the live album “Songs From The Road” (2013).

In 2014 she released her fourth studio album “The Dirty Truth” on Axehouse Records that featured the singles “Mud, Honey” and “Wicked Soul”. In 2016, Joanne followed up with the release of her fifth album “Wild” (Produced by Kevin Shirley) which saw her perform songs “Dyin’ To Know” and “Summertime” on BBC Two Television’s popular music show “Later With Jools Holland”. Three years later, in 2019 she signed to Silvertone Records via Sony Music and released her seventh studio album, “Reckless Heart”. Over the past two decades, Joanne has proven herself as a prolific songwriter, releasing seven acclaimed albums under her belt, each increasingly more successful with her 2019 “Reckless Heart” breaking into the UK Top 20 Album Chart and cementing herself as one of the most important exports in British blues-rock.

Joanne is currently touring around the world and writing new songs for what will be a very busy 2022.

Music editor for Nashville.com. Jerry Holthouse is a content writer, songwriter and a graphic designer. He owns and runs Holthouse Creative, a full service creative agency. He is an avid outdoorsman and a lover of everything music. You can contact him at JerryHolthouse@Nashville.com
Previous Lauren Alaina To Become An Official Opry Member February 12
Next CMT Announces “CMT Next Women Of Country”