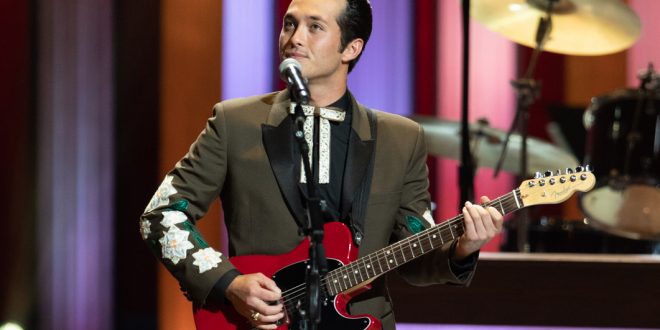 Buena Vista Records / Industrial Media’s 19 Recordings artist Laine Hardy stepped into the circle for the first time last night for his Grand Ole Opry debut. The Louisiana native shared the iconic stage with fellow American Idol alums Lauren Alaina and mentor Bobby Bones, along with Michael Ray, Rodney Crowell and more. Laine received a rousing welcome from the audience, including throngs of friends, family, and fans who made the trip from all over the country to cheer him on. Laine wore a special suit designed and embroidered by Ranger Stitch for the milestone moment. An homage to his heritage as a native Louisianan and his Korean roots, the jacket features many of his home state’s most iconic images; magnolias, alligator, and a tiger designed in traditional Korean style.

Hardy performed “Authentic,” and “Other LA,” both from his forthcoming debut album Here’s To Anyone, set to release on September 17. Here’s To Anyone, was produced by Michael Knox and features songs from some of Nashville’s biggest hitmakers.

Laine is currently headlining his Monster Energy Outbreak tour with dates throughout the fall.

Music editor for Nashville.com. Jerry Holthouse is a content writer, songwriter and a graphic designer. He owns and runs Holthouse Creative, a full service creative agency. He is an avid outdoorsman and a lover of everything music. You can contact him at JerryHolthouse@Nashville.com
Previous PREMIERE: Shane Owens’ “Music Man”
Next Cody Jinks Set To Release Country and Metal Albums