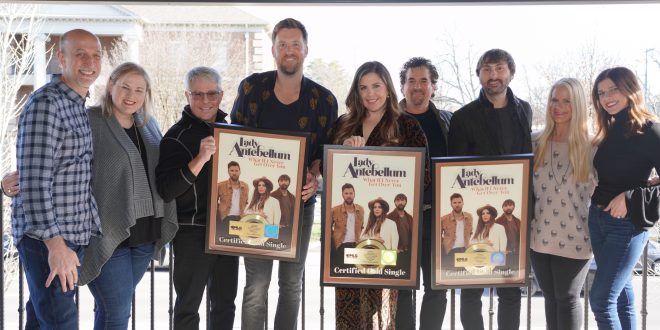 Seven-time Grammy winning trio Lady Antebellum launch into 2020 earning their 10th career No. One at Country radio as “What If I Never Get Over You” tops both Mediabase/Country Aircheck Singles and Billboard’s Country Airplay chart this week. Simultaneously, the lead single from their critically acclaimed No. One selling album OCEAN (BMLG Records) has been certified GOLD by the RIAA. The trio celebrated the success behind “What If I Never Get Over You” today with BMLG Records, toasting to their first-ever chart topper together.

“The moment we heard ‘What If I Never Get Over You’ we knew it was going to be an integral piece of OCEAN,” Dave Haywood said. “It has been a long time since we released a mid-temp longing duet like this which is so much of who we are and how we started. It sort of felt like coming home and we are grateful to the team behind us and Country radio for believing in the song as much as we did from the start.”

Music editor for Nashville.com. Jerry Holthouse is a content writer, songwriter and a graphic designer. He owns and runs Holthouse Creative, a full service creative agency. He is an avid outdoorsman and a lover of everything music. You can contact him at JerryHolthouse@Nashville.com
Previous Rising Star Gabby Barrett Releases “Hall of Fame”
Next LOCASH Wraps Up USO Holiday Tour