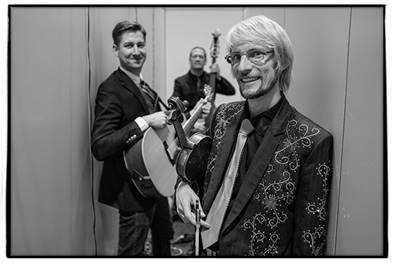 Kyle Dillingham, the skateboarding, fiddling phenom once again cemented his status to be referred to as such, during his Grand Ole Opry debut on Wednesday, July 24. The classically-trained maestro from Oklahoma claimed his own unique part of Opry history by becoming the first guest artist to ride his skateboard onto Country music’s biggest stage. Spinning to a perfect 360 degree stop inside the circle, with his fiddle in one hand and hoisting his skateboard into the air with other, Dillingham revealed an image of Dolly Parton on the board’s opposite side to the Opry crowd. Met with favorable applause, Dillingham and his Horseshoe Road band mates, Peter Markes and Brent Saulsbury, immediately belted into their rendition of Albert Brumley’s “I’ll Fly Away.” Closing out his two song set before skating offstage, Dillingham flexed his classically-trained music muscle with a performance of the classic Russian romance “Ochi Chyornye (Dark eyes),” paying tribute to the historic tours to Soviet Russia in the 70s and 80s by Roy Clark and The Oak Ridge Boys.

“For my whole life, my two passions were fiddling and skateboarding!” said Dillingham. “Never in my life did I ever imagine that they would come together and make history on the most sacred stage in country music! I am so proud to now be a part of the Opry story. How awesome to share this incredible moment with my band mates, Peter Markes and Brent Saulsbury, and to be surrounded by family and dear friends backstage!”

After Kyle’s one-of-a-kind Opry debut, he returned to his backstage dressing room where he was surrounded by friends, family and his band mates. While thanking everyone in the room for their contribution and support for his career, he turned to his girlfriend Ginnette Tavzel, bended down on one knee and popped the question. She tearfully embraced Kyle and said “yes,” as everyone around cheered and applauded.

“As if an Opry Debut was not enough excitement for one night, I also took the moment backstage to ask my girlfriend, Ginny, to be my wife! “Into the Circle” (dressing room number 4) was transformational for me personally and professionally. Both of these moments will have an enormous impact on the rest of my life, and I am so grateful that I will have somebody so wonderful to share the journey with me!”

Music editor for Nashville.com. Jerry Holthouse is a content writer, songwriter and a graphic designer. He owns and runs Holthouse Creative, a full service creative agency. He is an avid outdoorsman and a lover of everything music. You can contact him at JerryHolthouse@Nashville.com
Previous Ty Herndon Releases “Walking In Memphis”
Next Madison Kozak Releases Debut Single “First Last Name”