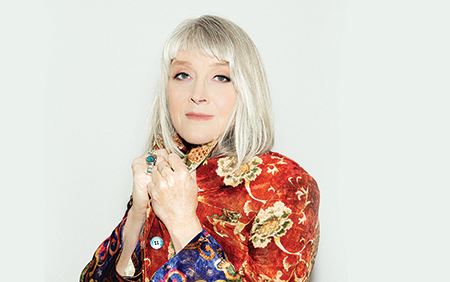 In celebration of the 20th anniversary of Glimmer, Grammy-nominated Nashville-based singer/songwriter Kim Richey will release A Long Way Back: The Songs of Glimmer on Yep Roc Records November 29.
Featuring new recordings of her critically lauded 1999 album, the limited first edition LP release includes 10 songs on blue and white vinyl with a handwritten note from Richey, and a full 14-song album download. Now available for pre-order, the first single, “Hello Old Friend,” is at all digital service providers.

Recorded in Nashville, A Long Way Back: The Songs of Glimmer features stripped-down reinterpretations of the original album. Produced by guitarist and two-time Grammy-nominated producer Doug Lancio, who played most of the instruments. Other musicians include Nielsen Hubbard, Dan Mitchell and Aaron Smith.

“All of the original 14 songs from this new album were recorded in producer Doug Lancio’s basement studio and given a more intimate treatment,” says Richey. “It was great to revisit these old friends and be able to make them available again to fans.”

This fall, Richey will be on tour supporting Trisha Yearwood for a string of dates and will be Brandi Carlile’s special guest on opening night of her six-night run at the Ryman Auditorium. A 10-date UK tour is planned for November. A full list of dates is below.

Since the release of her 1995 self-titled debut album, Richey has “won raves for her sweetly alluring, folk-friendly brand of country” (World Café), while Bitter Sweet (1997) and Glimmer (1999) cemented her status as a gifted singer/songwriter. Subsequent releases –Rise (2002), Chinese Boxes (2007), and Wreck Your Wheels (2010), and Thorn In My Heart (2013) – followed and garnered acclaim that “she writes some of the most beguiling melodies and freshest chord changes of her generation.” (Los Angeles Times).

As a songwriter, Richey has written two No. 1 hits for Radney Foster (“Nobody Wins”) and Trisha Yearwood (“Believe Me Baby”), the latter of which was Grammy-nominated, as well as tunes for Mary Chapin Carpenter, Gretchen Peters, Patty Loveless, Jamie Lawson and Jim Lauderdale. Her vocals also appear on Jason Isbell’s praised Southeastern album as well as albums by Ryan Adams and Shawn Colvin.

Music editor for Nashville.com. Jerry Holthouse is a content writer, songwriter and a graphic designer. He owns and runs Holthouse Creative, a full service creative agency. He is an avid outdoorsman and a lover of everything music. You can contact him at JerryHolthouse@Nashville.com
Previous Craig Morgan Makes Steady Gains At Country Radio
Next Ida Mae Announces Headlining Tour