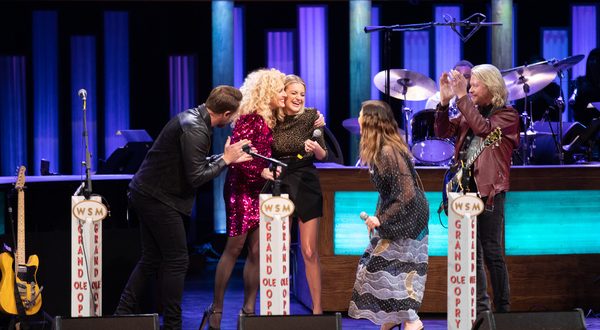 Kelsea Ballerini was surprised on Tuesday night’s show by Opry group Little Big Town with an invitation to become an official Grand Ole Opry member. After Ballerini performed her segment, Little Big Town took the stage to close out the show, inviting Ballerini back to perform the group’s hit “Girl Crush” with them. As the song concluded, the band changed its final lyrics to “Kelsea Ballerini, do you wanna join the Opry?”

“Yes,” Ballerini exclaimed, “I’m gonna pass out I think!” Collecting her thoughts, Ballerini recalled having visited the Opry at age 13 with her mother and knowing then that she wanted to support the Opry, even if only as a fan. “To be on this stage is the greatest gift in the world,” she said. “This is the home of country music, and I get to be a part of it.”

“For the rest of your life,” Little Big Town’s Karen Fairchild added.

“We are thrilled at the thought of Kelsea Ballerini joining the Opry family,” said Opry General Manager Sally Williams. “So many of us at the Opry have been fans of her recordings, her songwriting, and her live performances since she played the Opry for the very first time. Having grown to know her personally in the years since, we love and respect her just as much as a person as an artist. We look so forward to her Opry induction in April and to all the years of great music we’ll share.”
Opry Tickets

Music editor for Nashville.com. Jerry Holthouse is a content writer, songwriter and a graphic designer. He owns and runs Holthouse Creative, a full service creative agency. He is an avid outdoorsman and a lover of everything music. You can contact him at JerryHolthouse@Nashville.com
Previous Dustin Collins To Join Kentucky Takeover At Marathon Music Works
Next Jason Aldean To Receive ACM Dick Clark Artist Of The Decade Award