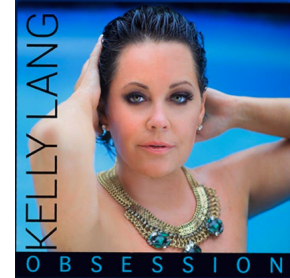 Singer/songwriter Kelly Lang’s latest album, Obsession (Leopard Entertainment) is what she describes as a “self-penned expression of her ups and downs as a woman.” The all-new project presented by Springer Mountain Farms includes 12 tracks, all of which were written and produced by Lang. Obsession is available for purchase through all digital retailers this Friday, October 20. Today, Roughstock.comexclusively premiered the music video to “Mr. Right,” a new tune included on the album (View HERE).

“This is the most personal album I have ever done,” says Lang. “The vulnerability it takes to share your innermost thoughts as a writer with the listener is a bit daunting, but I hope they can feel my sincerity within the music. I hope that everyone can relate to at least one track on this album. It ranges from the upbeat and light hearted ‘Mr. Right’ to the dramatic ballad in ‘I’ll Just Hold My Breath.’ It is a little intimidating being the sole writer and producer on a project because if it’s not well received, you’re responsible for that. However, if it’s good and your audience is into it, that’s also yours to claim.”
When Lang began thinking of recording new material, she felt the time was right to start on a project that would showcase her writing abilities. As a songwriter, her songs have been recorded by a list of who’s who in the music industry including George Jones, Jerry Lee Lewis, The Oak Ridge Boys, Ricky Skaggs, BJ Thomas, Lorrie Morgan, Janie Fricke, TG Sheppard, Jimmy Fortune, Crystal Gayle, and many others.
Award-winning recording artist and star of stage and television Marie Osmond recently gave the album her stamp of approval. “I’m so very proud of my dear friend Kelly Lang and her new CD, Obsession,” says Osmond. “Not only are her vocals rich and beautiful, but the fact that she wrote all of the unique songs and produced the project herself is simply amazing! She is an excellent writer. Obsession will have you obsessed to hear more from Kelly.”
Lang has planned a special CD release party in Nashville on November 9 at 3rd & Lindsley Bar & Grill. Tickets are $15.00 and can be purchased at 3rdandlindsley.com.
Autographed copies of Obsession are available for purchase at kellylang.net.
Obsession Track Listing:
1. My New Obsession
2. Last One Standing In The Rain
3. What Do You Do When You Don’t
4. Under A Tennessee Moon
5. Mr. Right
6. One Day Too Late
7. His Guitar
8. Don’t Play Games With Me
9. Hell Hath No Fury
10. Lay Me Down Easy
11. Wonder Woman
12. I’ll Just Hold My Breath
About Kelly Lang
Kelly Lang has spent most of her life in the music business as the daughter of Conway Twitty’s road manager. She has performed on Star Search, Nashville Now, Music City Tonight, the stage of the Grand Ole Opry, and many other national television shows. In addition, she has shared the stage many times with music icon, Barry Gibb. Over the past few years, she has recorded two critically-acclaimed albums of classic love songs. Her most recent, Throwback, includes collaborations with Olivia Newton-John, Lee Greenwood and Paul Shaffer. Lang is married to country music legend TG Sheppard.
For more information on Kelly Lang, visit kellylang.net or follow her on social media:Facebook, Twitter, Instagram