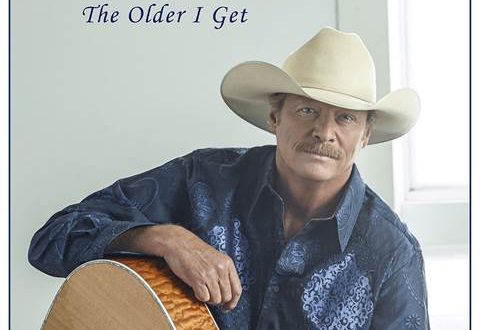 As he prepares for his formal induction into the Country Music Hall of Fame (on Sunday, October 22), Alan Jackson is releasing new music for fans. “The Older I Get” – a first taste of what’s to come on Jackson’s next album – is his first new studio recording since 2015.

“This song reflects a lot of how I feel these days,” he says of the song, written by Adam Wright, Hailey Whitters and Sarah Allison Turner. “It’s a good song; I really liked it, but the message was a little different when I first heard it. I thought maybe it could be a little more positive about being older and wiser and more content, so they rewrote a few things, and this is how it ended up.”

“The older I get / The more I think / You only get a minute / Better live while you’re in it / ‘Cause it’s gone in a blink,” Jackson sings in the opening lines of the song. The reflective ballad is filled with the revelations and realizations that can only come from a life well-lived, and the words and melody create an instant image of Jackson’s own place in life and country music. “The older I get / The more thankful I feel / For the life I’ve had / And all the life I’m living still.”

This weekend, Jackson will cement his place in Country Music history as he formally becomes a member of the Country Music Hall of Fame at the Museum’s annual Medallion Ceremony. He’ll join the echelon of 130 of Country Music’s greatest names as this year’s Modern Era Artist inductee. “It’s an honor,” a humble Jackson said after his name was revealed in April. “For a man who loves country music there is no higher honor. This is the mountain top!”

In selecting Jackson for membership alongside the greatest names in the genre, the Country Music Association noted, “With dozens of chart-topping singles, tens of millions of albums sold, and an un paralleled reputation as a singer and songwriter, he ranks with The Beatles, Elvis Presley and a very small handful of other transcendent artists who stand out like signposts in pop music history. He has blended the old and new in a musical style that is urban and rural, rugged and raw. He took the sounds of Country Music in his youth, and blended them with modern production in a way that made him an immediate star.”

In recent years, Jackson’s often found himself asked in interviews if there’s any unrealized dream or goal he has yet to attain. “I’d never say the Country Music Hall of Fame because I just felt like that was kind of pretentious to think that I deserve to be in there. But now I can say this is about the last dream on the list – it’s just unbelievable.”

Jackson’s membership in the Country Music Hall of Fame is the latest in a long line of career-defining accolades that include three CMA Entertainer of the Year honors, more than 25 years of membership in the Grand Ole Opry, a 2016 Billboard ranking as one of the Top 10 Country Artists of All-Time, induction to the Nashville Songwriters Hall of Fame, and the Heritage Award as the most-performed country songwriter-artist of ASCAP’s first 100 years. Check out a Country Music Hall of Fame-themed Alan Jackson playlist HERE.

“The Older I Get” will be featured on Jackson’s next studio album, planned for a 2018 release. The newly-minted Hall of Famer will perform on this year’s CMA Awards telecast November 8, and he’ll soon announce tour plans for the coming year.

Previous KELLY LANG REVEALS HER VERY OWN… OBSESSION
Next New Music Friday! Payton Smith Debut Single “Let Me Help You With That”