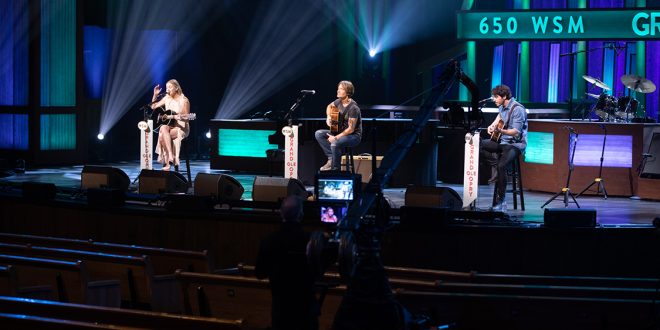 “I want to thank the Opry family here for the keeping the lights on. Keeping the circle moving,” said Urban. “It means the world to us and to everybody out there watching and listening tonight.”

“I was really interested to see what it was going to feel like to be in here without these pews full,” reflected Ballerini. “It’s still magic, still sounds good, feels rich and feels special. That just shows how special this place is.”

Urban kicked off the broadcast with “Coming Home” and offered other hits throughout the hour including “God Whispered Your Name,” “Long Hot Summer,” “Somebody Like You,” “Wasted Time,” and “Blue Ain’t Your Color” (as the Opry barn turned blue in honor of  2020 graduates).

Ballerini performed songs from her new album, “kelsea”, including the Opry debut of “a country song,” which she says was a song she put on her album specifically to play on the Opry stage. She also performed “hole in the bottle” and “homecoming queen?.”

Evans performed his debut hit single “Kiss Somebody” and honored the country’s frontline workers saying “Thank you to all the essential workers out there that have been keeping the world going and keeping us all safe as can be” before performing the first song he ever played by himself in public, the Glen Campbell classic “Try A Little Kindness.”

“In addition to the frontline workers and all the healthcare workers  … I want to say a big thank you to all the drivers out there,” said Urban. “Truck drivers, van drivers, delivery people all over the world that are doing an amazing job getting everything where it needs to get to. Medical supplies and food and all the things we would normally take for granted. The fact that it is still arriving is not being done by magic. You guys are out there doing the hard work so we thank you. We thank your families too because that takes a lot of support on the homefront. So thank you to all of you.”

The Opry is scheduled to salute the United States Military with its annual pre-Memorial Day Salute the Troops Opry performance next Saturday, May 23. Among the artists scheduled to perform are Craig Morgan, Steven Curtis Chapman, and Kellie Pickler. This year the Opry will also honor essential workers who are on the frontline against the war on COVID-19.

Morgan, Chapman and Pickler will step on the stage Saturday, May 23 at 8 PM ET / 7 PM CT. Like this week’s show, next Saturday’s performance will be broadcast live on Circle and Gray TV stations, DISH Studio Channel 102, Sling TV and other TV affiliates in addition to a companion live stream on Circle All Access and YouTube. TV and radio personality Bobby Bones will host the Circle telecast, while Mike Terry will serve as radio announcer for those tuned in on 650 AM WSM and SiriusXM.

For the past ten weeks, during this current global pandemic, the Grand Ole Opry has overcome many challenges and obstacles as health guidelines and local/state government restrictions have evolved weekly. The Opry, with the help of its membership and wider artist and industry community, has continued to bring millions of fans around the world together to keep the music playing without an Opry House audience in attendance.  Embracing today’s technology, the Opry is broadcast and streamed with a very small production team as the show’s artists perform acoustically.

Music editor for Nashville.com. Jerry Holthouse is a content writer, songwriter and a graphic designer. He owns and runs Holthouse Creative, a full service creative agency. He is an avid outdoorsman and a lover of everything music. You can contact him at JerryHolthouse@Nashville.com
Previous “Georgia On My Mind” Goes From Ryman To Online
Next Pilgrimage Cancels 2020 Festival