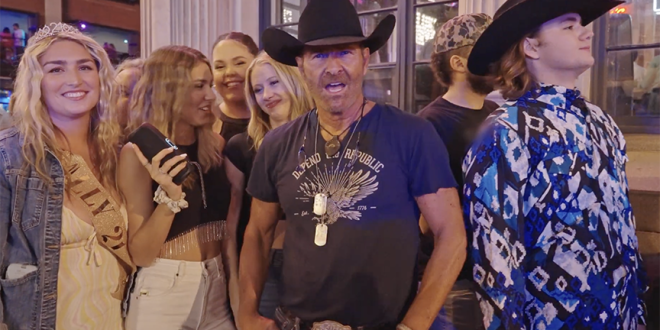 Keith Burns is back with a brand new song, “Came Here To Drink.” The new video was shot on Nashville’s Lower Broadway on a Saturday night and It provided Burns and the video’s directors, Riley Mau and Ray T with a constantly changing cast of characters. Watch above as Burns welcomes tourists and locals alike to participate in his new video.

Burns wrote and produced the song with long-time collaborators, Ray T and Isaac Harris and is releasing the track on his label, Song Consortium. It will be available on all digital platforms on January 6, 2023.

“This was by far the most fun I’ve had shooting a video,” Burns said, ” I could feel the electricity and energy from the crowd on the street and the music cranked up loud. The characters, the energy, the music, the interaction, and the lights of Broadway all came together to make what I think is one fantastic video.”

Keith Burns, Founding member of the Grammy-nominated ACM & AMA award-winning, platinum-selling group Trick Pony. He has three Top 10 songs for such artists as Tick Pony and Joe Diffe and has also written several Top 40 songs with such artists as Hootie & The Blowfish, Sammy Kershaw, Burns & Poe, and Mo Bandy. Keith and his wife Bonnie own and manage B3E Music in Nashville, TN in which they operate publishing companies and manage country artists’ careers.

Music editor for Nashville.com. Jerry Holthouse is a content writer, songwriter and a graphic designer. He owns and runs Holthouse Creative, a full service creative agency. He is an avid outdoorsman and a lover of everything music. You can contact him at JerryHolthouse@Nashville.com
Previous Parmalee Hits The Top Of The Charts
Next LISTEN: Tim Gerard’s “Waterloo”