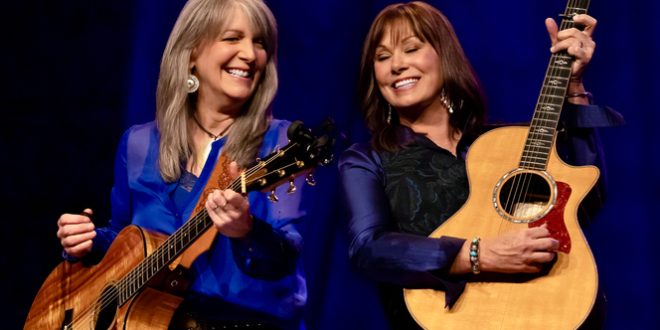 Kathy Mattea and Suzy Bogguss have been preparing for this for a long time. The closest of friends for many years, these two country and folk legends have finally joined forces to share their celebrated music and personal chemistry on theater stages across the country. Appropriately titled Together At Last, the tour features both artists on stage for the entire performance, swapping songs and stories, singing harmony, and playing guitar on each other’s biggest hits. Never content to rest on their past achievements, the pair brings new material to these shows, along with two careers worth of humorous and heart-warming stories.

“Kathy and I always have a lot of irons in the fire,” says Suzy, “but we’ve had some time to think about priorities lately and we realized, this was a big one.”
“We know each other’s music so well,” adds Kathy. “It’s been fun to really dig in and learn these songs!”

Besides guesting on each other’s recordings, there have been only a few chances for them to perform together: the groundbreaking Women of Country showcase and a PBS White House special for television, as well as the GRAMMY-nominated collaboration with Alison Krauss and Graham Nash on his classic “Teach Your Children,” from the Red, Hot, and Country compilation.
Finally the time is right, and fans are excited to see Kathy Mattea and Suzy Bogguss…Together At Last!

The first leg of the tour begins this week — look for them at the The Franklin Theatre in Franklin Tennessee on 4/15.

Music editor for Nashville.com. Jerry Holthouse is a content writer, songwriter and a graphic designer. He owns and runs Holthouse Creative, a full service creative agency. He is an avid outdoorsman and a lover of everything music. You can contact him at JerryHolthouse@Nashville.com
Previous LISTEN: Old Crow Medicine Show’s “Bombs Away”
Next Ernest Scores Most Added Single At Country radio