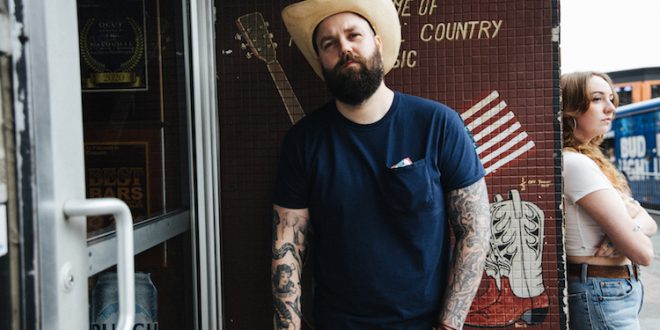 Joshua Hedley will release his new album Neon Blue on April 22nd, 2022 via New West Records. The 12-song set was co-produced by Jordan Lehning & Skylar Wilson and mixed by Kyle Lehning. Neon Blue is the follow up to his critically acclaimed 2018 debut Mr. Jukebox, which was released by Jack White’s Third Man Records. Hedley’s breakout debut showcased his deep knowledge of country music history, in particular the beery ballads of the 1950s and ‘60s. His mentors were George Jones, Ray Price, and Glen Campbell, but his most remarkable accomplishment was putting his own spin on their style. Neon Blue, on the other hand, examines a very different, often forsaken era: the early 1990s.

“The last bastion of country music,” says Hedley, “was the early 1990s, roughly 1989 through 1996. You could turn on the radio and immediately know you’re hearing a country song. You could still hear steel guitar and fiddle. But there was a hard fork around 1996 or ‘97, when country veered off into pop territory. Neon Blue asks, What if that fork never happened? What if country kept on sounding like country?”

The era may have been dismissed by traditionalists at the time as slick or overproduced, but Hedley finds something exciting in that sound. Neon Blue plays up the excitement of bigger-than-life choruses, the relatable emotions of those sad-eyed ballads, and the inventiveness of the lively production. Hedley says, “The sound is modern, but it’s still discernibly country.” Neon Blue songs would sound right at home on a playlist between Garth Brooks’ “Friends in Low Places” and Alan Jackson’s “Chattahoochie,” and at times you can see a thousand lighters held high during an encore. After making Mr. Jukebox with a close group of friends, Hedley decided to record his follow-up with professional session players — a Nashville tradition. Lehning & Wilson corralled an all-star crew featuring some of the city’s best players, who made Hedley step up his game. “All the players on this record are the people who are playing on Top 40 hits. They’re the professionals playing two or three sessions a day, and it was crazy to see them work…I came in with skeletons and they put flesh on them. They made them into human beings,” Hedley shares.

Friday, Hedley premiered the video for the album’s title track, “Neon Blue (watch above.) Of the song, Hedley says “For whatever reason that title just popped into my head, and I was obsessed with it. You’ve got the neon lights of a honkytonk, but you’ve also got that sadness. We got the vibe for the album from ‘Neon Blue,’ and every other song was built around it.”

Hedley has been a presence in Nashville for nearly twenty years, although you have to know where to find him. You have to brave the tourists on Broadway downtown, bypass the three-story bars blasting Journey, and make your way to Robert’s Western World, a time-capsule honkytonk from a different era. “It’s the last holdout. It’s exactly the same now as it was when I started playing there seventeen years ago. It never doesn’t feel like home because it never doesn’t feel familiar.” He’s got tenure at Robert’s, playing hours long sets full of his own songs and country classics, and he hates to miss a show. In 2018, after he opened for Jack White at Bridgestone Arena (by far the largest venue in town), he was back at Robert’s right across the street playing to a boot-scooting audience the very next night. In honor of this truly unique oasis, an extremely limited, autographed version of the vinyl edition will be pressed on “Robert’s Fried Bologna” color vinyl in tribute to the late night sandwich favorite being served up to Robert’s patrons nightly.

Music editor for Nashville.com. Jerry Holthouse is a content writer, songwriter and a graphic designer. He owns and runs Holthouse Creative, a full service creative agency. He is an avid outdoorsman and a lover of everything music. You can contact him at JerryHolthouse@Nashville.com
Previous Deborah Allen Releasing First Album In A Decade
Next Country Music Hall Of Fame Opens Florida Georgia Line Exhibit