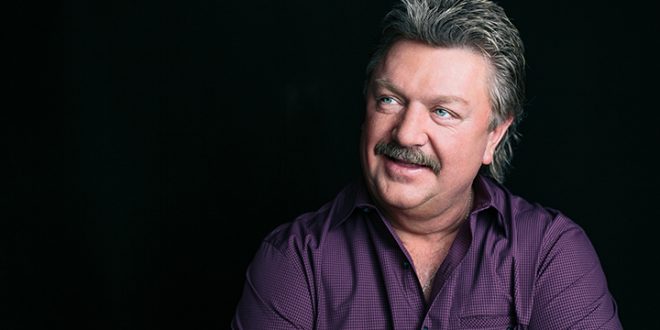 Joe Diffie announced he will begin as host of the mid-day show on Big Country 99.5 airstaff. Diffie will host on KXBL-FM (an Oklahoma station) remotely via voice-track from Nashville and his many tour stops, starting Monday April 1st. Diffie will continue to perform his full slate of concert appearances.

A Tulsa native, Diffie recalls the first time he heard his music on the radio was on Big Country sister station, KVOO.

“When they played ‘Home’, that’s when it hit me that I was on my way,” says the Grammy winner, whose debut single went straight to #1. “I’ve wanted to try my hand at voice work for a while now, so when Big Country approached me to host, it seemed like the perfect time and the perfect place. It’s even better that they’re allowing me to do it remotely so I can continue to tour as much as ever.”

Diffie’s career only grew from there with chart-dominating hits like “If The Devil Danced (In Empty Pockets),” “New Way (To Light Up An Old Flame),” “Ships That Don’t Come In,” “Honky Tonk Attitude,” “Prop Me Up Beside The Jukebox,” “John Deere Green,” “Third Rock From The Sun,” “Pickup Man,” “So Help Me Girl,” “Bigger Than The Beatles,” “Texas Size Heartache,” “A Night To Remember,” “It’s Always Somethin’” and the list goes on and on.

The influence of his music continues to be felt in hit song homages from Jason Aldean (“1994”) to Chris Young (“Raised On Country”). But he’s especially proud to be coming home as an announcer/DJ on Big Country 99.5.

“Whether I’m home in Nashville or on the road, it’s so awesome to know that my mom and family back home can listen to me every day,” Diffie said.

Brian Jennings, program director at Big Country, says “Joe’s music is a reflection of the dominance of Oklahoma artists that have become part of the country music soundtrack across the nation. And Big Country is the only station in Tulsa that is positioned to properly celebrate that legacy. Think about the influence that Oklahoma music has on the nation: Joe Diffie, Reba, Garth, Vince Gill, Toby Keith, Ronnie Dunn, Blake Shelton, Carrie Underwood…shall I go on? Having Joe on as part of the team brings Tulsa pride to his national status. I am so proud.”

One of the most successful artists of the 1990’s, Diffie continues to record music and tour.

Music editor for Nashville.com. Jerry Holthouse is a content writer, songwriter and a graphic designer. He owns and runs Holthouse Creative, a full service creative agency. He is an avid outdoorsman and a lover of everything music. You can contact him at JerryHolthouse@Nashville.com
Previous Country Music Coming Together For John Berry
Next Dustin Lynch Celebrates First Number One As A Songwriter