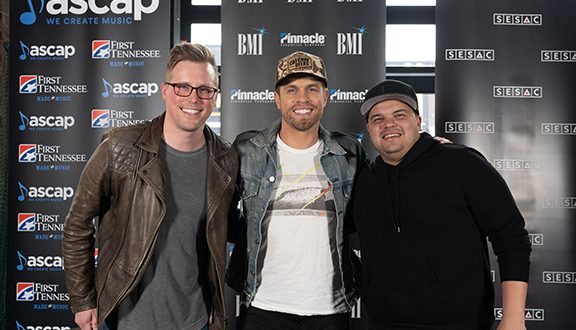 Dustin Lynch Celebrates First Number One As A Songwriter

Embracing the funky-fresh, dive bar aesthetic of Hi-Fi Clyde’s on Church, the party was hosted by ASCAP, BMI and SESAC in honor of Lynch’s SIXTH No. 1 as an artist. Co-writers Lynch (BMI), Justin Ebach (SESAC) and first-time chart-topper Andy Albert (ASCAP) expressed their immense gratitude for the hard work and devotion of the crowd of industry pros, family, and friends in attendance that helped take the easy-breezy chart-blazer all the way to the top.

“We were all just so sure about this song from the beginning. We only had the track down and we knew it was something special,” shared Lynch. “I want to thank these two guys up here (Albert and Ebach) for getting up on day three after a long night on the bus ready to write, because that’s what leads to moments like this.”

Giving more cause for celebration, Lynch’s next single, “Ridin’ Roads” hit Country airwaves yesterday after arriving on radio playlists as the #1 most-added song of the week, with 46 stations on board spinning the track nationwide.

Reaching the Top 5 on the iTunes All Genre Songs chart and making a statement as the #1 highest-selling Country single last week, “Ridin’ Roads” touches on the laid-back nostalgia of life in Tullahoma, TN, cruising a two-lane road with easy-rolling melodies that mix seamlessly with Lynch’s signature country-to-the-core lyrics.

Music editor for Nashville.com. Jerry Holthouse is a content writer, songwriter and a graphic designer. He owns and runs Holthouse Creative, a full service creative agency. He is an avid outdoorsman and a lover of everything music. You can contact him at JerryHolthouse@Nashville.com
Previous Joe Diffie Puts On His DJ Hat
Next Tin Pan South Kicks Off With A Party