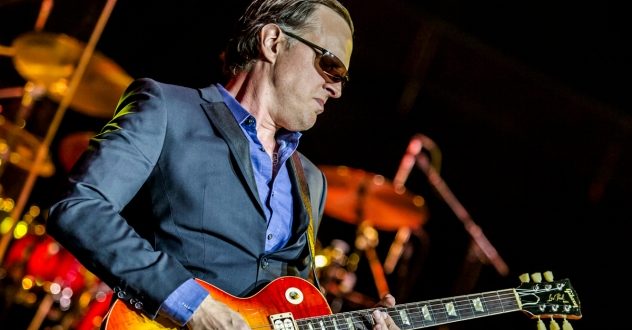 Joe Bonamassa Stopping at The Ryman in August

Joe Bonamassa announces a run of shows for Summer 2022. The 11-date tour across the U.S. includes a stop at Nashville’s Ryman Auditorium. Buy tickets HERE. The tour will end with an unprecedented live event featuring Bonamassa on Jones Beach in New York on August 19 which will include special guest performances from Kenny Wayne Shepherd Band and more to be announced.

Bonamassa, a virtuoso on guitar, is backed by a stellar band of some of the top musicians around. Hailed internationally as one of the greatest guitar players of his generation and cited by Guitar World Magazine as “the world’s biggest blues guitarist,” Bonamassa has almost single-handedly redefined the blues-rock genre and brought it into the mainstream. On tour he will perform Time Clocks in full, alongside career-spanning fan favorites with his incredible all-star band.

Time Clocks is a testament to his credentials and a toast to his longtime fans. His new sound has a raw and vital flavor, combined with a resolute skill that can only be gained through years of perseverance and unyielding dedication. It’s Bonamassa at his finest, ready to rock. “What started out with the intentions of being a trio record turned into probably my most adventurous and involved record to date,” explains Bonamassa.

His longtime producer Kevin Shirley adds, “I think Joe has made an album that is truly transitional. From a blues musician to a superstar artist, [and] I’m so thrilled to be along for the ride.”

Recorded in New York City, the album rediscovers Bonamassa at a newfound peak with heartfelt songwriting and Blues Rock prowess. The album was created with longtime collaborators Kevin Shirley as producer and manager/business partner Roy Weisman as executive producer. Recorded in New York City at Germano Studios/The Hit Factory, the album was mixed by the legendary Bob. The fantastic artwork on the album was created by famous graphic artist Hugh Syme. ‘Time Clocks’ is available on CD, VINYL and Digital, released on Bonamassa’s own record label, J&R Adventures.TT

Music editor for Nashville.com. Jerry Holthouse is a content writer, songwriter and a graphic designer. He owns and runs Holthouse Creative, a full service creative agency. He is an avid outdoorsman and a lover of everything music. You can contact him at JerryHolthouse@Nashville.com
Previous Craig Morgan To Release Powerful New Memoir
Next Kenny Chesney On “Everyone She Knows”