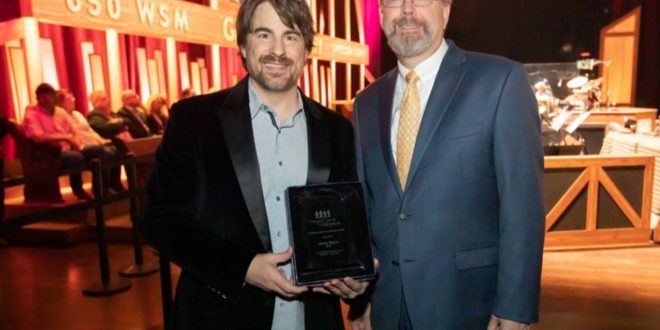 National Council For Adoption (NCFA) was proud to present the 2019 Warren and Mary Alice Babineaux Award to recording artist Jimmy Wayne in recognition of his continued commitment to creating positive change in the lives of children in foster care who need permanent families.

The Babineaux Award was presented following Jimmy’s 223rd Opry performance last night. This performance marks the continuation of a two-decade country career whose highlights include seven Top 40 hits, the Number One smash “Do You Believe Me Now,” and sold-out shows at venues like Madison Square Garden.

Throughout his career, Jimmy Wayne has been a vocal advocate for children in foster care, openly speaking about his own experience as a homeless youth who was taken in by an elderly couple — Bea and Russell Costner, 75 and 79 years old respectively — when he was 16 years old. They invited him to live in their home which allowed him to go back to school and ultimately pursue and catch his dream of writing and performing music. Jimmy’s three-time New York Times bestselling memoir Walk to Beautiful: The Power of Love and a Homeless Kid Who Found the Way has become a helpful resource for foster and respite parents seeking to better understand the children in their care. His children’s book Ruby the Foster Dog — inspired by a puppy he rescued while on his walk halfway across America — explores the challenges of foster care in a way that is both heartwarming and relatable for all ages.

In 2010, Jimmy founded Project Meet Me Halfway — an initiative that inspires Americans to take action in their home communities as volunteers and advocates for children in foster care. The campaign coincided with Jimmy’s walk halfway across America (1,700 miles from Nashville to Phoenix) to raise awareness of foster youth aging out of care into homelessness. Project Meet Me Halfway advocates for services for these at-risk youth and encourages states to increase the age of emancipation to 21 so that young people have continued access to critical services as they transition into adulthood. Jimmy helped advocate for the successful passage of legislation raising the emancipation age in California, Tennessee, and his home state of North Carolina.

“So many Americans know about foster care but aren’t able to comprehend the struggles that these children face on a day-to-day basis. Using his own experiences, Jimmy is able to give voice to the 440,000 children living in care,” says NCFA president and CEO Chuck Johnson. “Year after year, he has chosen to use his platform as a successful artist to magnify the voices of children who are so often voiceless. NCFA is grateful for his advocacy, and we’re proud to present him with the Babineaux Award this year.”

Music editor for Nashville.com. Jerry Holthouse is a content writer, songwriter and a graphic designer. He owns and runs Holthouse Creative, a full service creative agency. He is an avid outdoorsman and a lover of everything music. You can contact him at JerryHolthouse@Nashville.com
Previous Featured Bonnaroo Artist: The Nude Party
Next Music Biz 2019 Is In The Books